I remember seeing this shape as a kid in school and at that time it was pretty obvious to me that it was “impossible”. Now I looked at it again and I can’t see why it is impossible anymore.. Why can’t an object like the one represented in the following picture be a subset of R3? 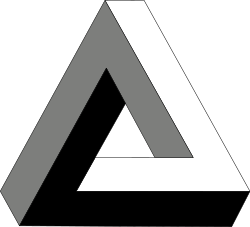 I can’t resist posting an answer based on the Mathematics Stack Exchange logo.

Let’s add some more cubes to the logo to make it clear that it’s a subset of the Penrose triangle (or would be, if it was a real 3D object) 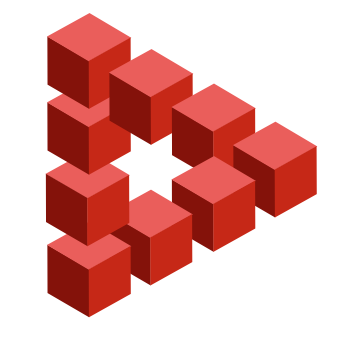 Now note that the cubes are overlapping, so some must be in front of others. But in fact, each cube is partially obscured by at least one other cube, in such a way that it appears to be some distance behind it. You can go around the hexagon in the original logo, in clockwise order, and see that each cube appears to be located further from the ‘camera’ than the next one in the cycle – which means that each cube is in front of itself. There’s no consistent “z ordering” that you can give to the different parts of the figure, and that’s one way to see that it’s impossible.

In reply to some of the comments, just to be explicit, the point here isn’t just that the cubes all overlap each other. If that was the case it would be incorrect, since it’s possible to have mutually overlapping arragements of cubes, as in this image provided by Misha Lavrov.

However, if we’re assuming that the Stack Exchange logo is a subset of the Penrose triangle then we know the cubes aren’t arranged like that. Instead, each cube is positioned so that some of its sides are coplanar with those of the next cube, and each cube is separated from the next by some distance in the z direction, where z is perpendicular to the plane of the image. Therefore the cubes’ centres of mass can’t be given consistent z coordinates.

As an extra bonus point, even if we don’t assume that, and instead assume that each cube is as close to the next as it can be (in the z direction) without the surfaces intersecting, the Math.SE logo still can’t be made into a consistent 3D shape, as the following animation shows. Note that it doesn’t quite form the Math.SE logo, since one cube ends up in front of all the rest. Of the six neighbouring pairs of cubes, three of them can have equal z coordinates, but for the remaining three pairs, one cube unavoidably has to have a greater z coordinate than the next. 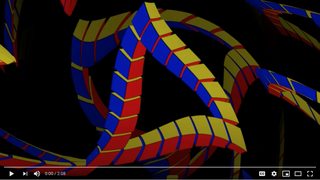