There are many more out there, but why do we need definitions that can be written with just sin,cos,tan etc. in maths? Why can’t they just be written as their expanded form?

Most trigonometric functions can be written with just sincos and tan. Why do we need so many?

Additionally, I mean all definitions.

There are a lot of trigonometric functions which are defined geometrically, which we rarely use anymore. Many of these are summarized by this image: 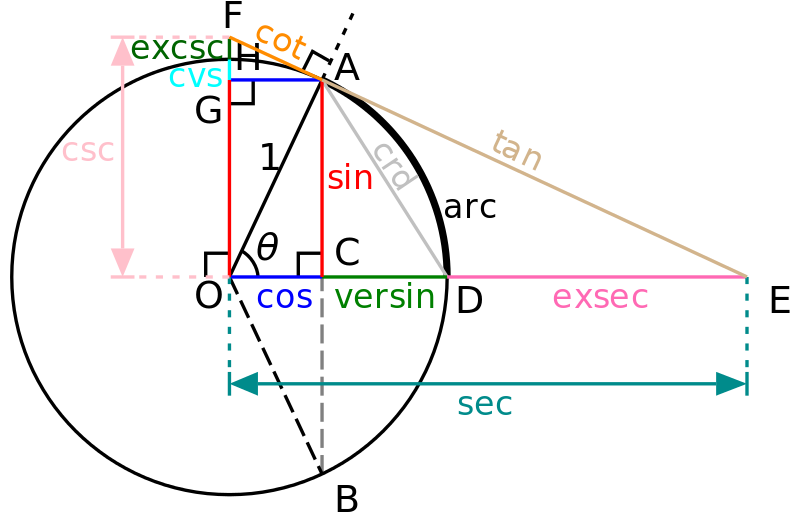 These all have their uses in particular circumstances. For example, the half versed sine (or haversine) is useful for determining the great circle distance between points, which is incredibly useful if you are trying to navigate. We don’t need the haversin, but it is useful, and reduces notation a bit in at least one specific context. The other trig functions are similar—personally, I would rather write
ddttan(t)=sec(t)2
than
ddtsin(t)cos(t)=1cos(t)2.

EDIT: This answer was written when the question seemed to be asking about the “necessity” defining secant and cotangent functions. It seems that the original questioner had a much more general question in mind, i.e. why do we need any definitions at all? The only possible response that that, I think, is because mathematics would be impossible without “definitions.” Working under the assumption that the original questioner is in earnest, a partial answer is as follows:

A huge part of mathematics is the language we use in order to communicate mathematical ideas. We could, I suppose, never define anything beyond the basic axioms, but then we could never get anything done, and would have no hope of ever communicating our ideas to others. If we don’t define a derivative, how do we describe the the motion of a planet? It would be cripplingly inconvenient if we could never write 3, and always had to write {{},{{},{{}}},{{},{{},{{}}}}. Not only is that quite hard to read (do you really want to check that I got all of my commas and braces right?), it is horribly inefficient. And this is just to describe a relatively small natural number. It only gets worse from here!

The point is that definitions allow us to encapsulate complicated ideas into a short collection of symbols (i.e. words) that allow us to make further deductions. Definitions are at the very heart of mathematics. We can do nothing without them.