My nephew was folding laundry, and turning the occasional shirt right-side-out. I showed him a “trick” where I turned it right-side-out by pulling the whole thing through a sleeve instead of the bottom or collar of the shirt. He thought it was really cool (kids are easily amused, and so am I).

So he learned that you can turn a shirt or pants right-side-out by pulling the material through any hole, not just certain ones. I told him that even if there was a rip in the shirt, you could use that to turn it inside-out or right-side-out, and he was fascinated by this and asked “why?”

I don’t really know the answer to this. Why is this the case? What if the sleeves of a long-sleeve shirt were sewn together at the cuff, creating a continuous tube from one sleeve to the other? Would you still be able to turn it right-side-out? Why? What properties must a garment have so that it can be turned inside-out and right-side-out?

Sorry if this is a lame question, but I’ve always wondered. I wouldn’t even know what to google for, so that is why I am asking here.

If you know the answer to this, could you please put it into layman’s terms?

Update: Wow, I really appreciate all the participation. This is a really pleasant community and I have learned a lot here. It seems that the answer is that you need at least one puncture in the garment through which to push or pull the fabric. It appears that you can have certain handles, although it’s not usually practical with clothing due to necessary stretching.

Accepted (a while ago actually — sorry for not updating sooner) Dan’s answer because among the answers that I understand, it is the highest ranked by this community.

First, a warning. I suspect this response is likely not going to be immediately comprehensible. There is a formal set-up for your question, there are tools available to understand what’s going on. They’re not particularly light tools, but they exist and they’re worthy of being mentioned. Before I write down the main theorem, let me set-up some terminology. The tools belong to a subject called manifold theory and algebraic topology. The names of the tools I’m going to use are called things like: the isotopy extension theorem, fibre-bundles, fibrations and homotopy-groups.

You have a surface $\Sigma$, it’s your shirt or whatever else you’re interested in, some surface in 3-dimensional space. Surfaces have automorphism groups, let me call it $\operatorname{Aut}(\Sigma)$. These are, say, all the self-homeomorphisms or diffeomorphisms of the surface. And surfaces can sit in space. A way of putting a surface in space is called an embedding. Let’s call all the embeddings of the surface $\operatorname{Emb}(\Sigma, \mathbb R^3)$. $\operatorname{Emb}(\Sigma, \mathbb R^3)$ is a set, but in the subject of topology these sets have a natural topology as well. We think of them as a space where “nearby” embeddings are almost the same, except for maybe a little wiggle here or there. The topology on the set of embeddings is called the compact-open topology (see Wikipedia, for details on most of these definitions).

Okay, so now there’s some formal nonsense. Look at the quotient space $\operatorname{Emb}(\Sigma, \mathbb R^3)/\operatorname{Aut}(\Sigma)$. You can think of this as all ways $\Sigma$ can sit in space, but without any labelling — the surface has no parametrization. So it’s the space of all subspaces of $\mathbb R^3$ that just happen to be homeomorphic to your surface.

Richard Palais has a really nice theorem that puts this all into a pleasant context. The preamble is we need to think of everything as living in the world of smooth manifolds — smooth embeddings, $\operatorname{Aut}(\Sigma)$ is the diffeomorphism group of the surface, etc.

There are two locally-trivial fibre bundles (or something more easy to prove — Serre fibrations), this is the “global” isotopy-extension theorem:

So the Palais theorem, together with the homotopy long exact sequence of a fibration, is giving you a language that allows you to translate between automorphisms of your surface, and motions of the surface in space.

So you try your luck and try to build the extension yourself. In some vague sense that’s a formal analogy between the visceral mystery of turning the surface inside-out and a kind of formalized mathematical problem, but of a fundamentally analogous feel.

We’re looking for automorphisms that reverse orientation. For an arbitrary surface with boundary in 3-space, it’s not clear if you can turn the surface inside out. This is because the surface might be knotted. Unknotted surfaces are examples like your t-shirt. Let’s try to cook up something that can’t be turned inside-out.

Maybe this doesn’t seem like a reduction to you, but it is.

For example, there are things called non-invertible knots:

So how do we cook up a knotted pair-of-pants from that?

Here’s the idea. The non-invertible knot in the link above is sometimes called $8_{17}$. Here is another picture of it:

Here is a variant on that. 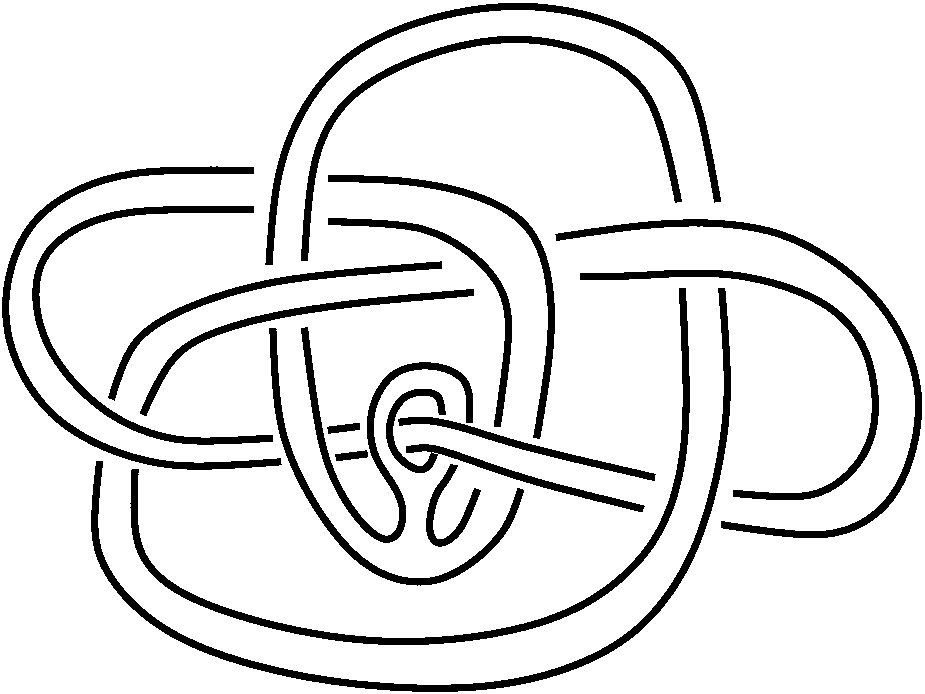 So why can’t this knotted pair of pants be turned inside-out? Well, the three knots are distinct, and $8_{17}$ can’t be reversed.

comment added later: I suggest if you purchase a garment of this form you return it to the manufacturer.