I’ve done some search in Internet and other sources about this question. Why the name ring to this particular object? Just curiosity.

The name “ring” is derived from Hilbert’s term “Zahlring” (number ring), introduced in his Zahlbericht for certain rings of algebraic integers. As for why Hilbert chose the name “ring”, I recall reading speculations that it may have to do with cyclical (ring-shaped) behavior of powers of algebraic integers. Namely, if α is an algebraic integer of degree n then αn is a Z-linear combination of lower powers of α, thus so too are all higher powers of α. Hence all powers cycle back onto 1,α,,…,αn−1, i.e. Z[α] is a finitely generated Z-module. Possibly also the motivation for the name had to do more specifically with rings of cyclotomic integers. However, as plausible as that may seem, I don’t recall the existence of any historical documents that provide solid evidence in support of such speculations.

Beware that one has to be very careful when reading such older literature. Some authors mistakenly read modern notions into terms which have no such denotation in their original usage. To provide some context I recommend reading Lemmermeyer and Schappacher’s Introduction to the English Edition of Hilbert’s Zahlbericht. Below is a pertinent excerpt.

Below is an excerpt from Leo Corry’s Modern algebra and the rise of mathematical structures, p. 149. 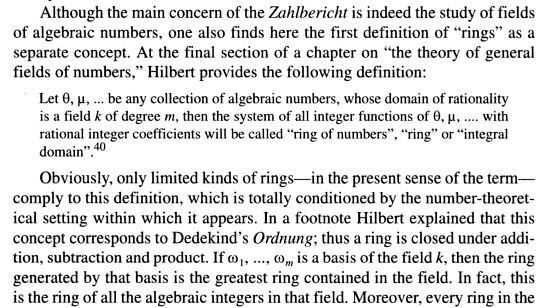 Below are a couple typical examples of said speculative etymology of the term “ring” via the “circling back” nature of integral dependence, from Harvey Cohn’s Advanced Number Theory, p. 49.

The designation of the letter D for the integral domain has some historical importance going back to Gauss’s work on quadratic forms. Gauss (1800) noted that for certain quadratic forms Ax2+Bxy+Cy2 the discriminant need not be square-free, although A, B, C are relatively prime. For example, x2−45y2 has D=4⋅45. The 4 was ignored for the reason that 4|D necessarily by virtue of Gauss’s requirement that B be even, but the factor of 32 in D caused Gauss to refer to the form as one of “order 3.” Eventually, the forms corresponding to a value of D were called an “order” (Ordnung). Dedekind retained this word for what is here called an “integral domain.”

The term “ring” is a contraction of “Zahlring” introduced by Hilbert (1892) to denote (in our present context) the ring generated by the rational integers and a quadratic integer η defined by η2+Bη+C=0. It would seem that module [1,η] is called a Zahlring because η2 equals −Bη−C “circling directly back” to an element of [1,η] . This word has been maintained today. Incidentally, every Zahlring is an integral domain and the converse is true for quadratic fields.