I used Mathematica to draw a function picture, but it is not beautiful like the picture below. I want know what software can draw beautiful pictures like the one below.

This picture is from the Wikipedia article on Hopf fibration. 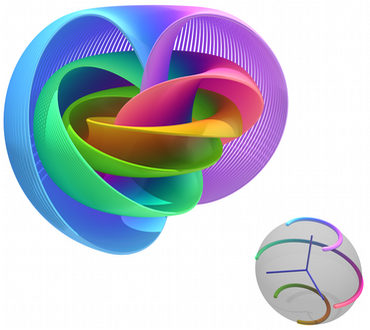 Both existing answers say that it is done in Sage, but it is only partially true. The visualization was not done in Sage itself. The image is ray-traced. Niles Johnson, author of the image, used Tachyon, an open source raytracer.

So in order to follow similar workflow my recommendation would be:

I would probably do everything in Blender, because it supports Python. I would download some math library, e.g. numpy, to make the data generation easier, then I can generate the geometry directly and Blender has a built-in ray-tracer, which can be used for rendering.