My friend gave me this puzzle:

What is the probability that a point chosen at random from the interior of an equilateral triangle is closer to the center than any of its edges?

I tried to draw the picture and I drew a smaller (concentric) equilateral triangle with half the side length. Since area is proportional to the square of side length, this would mean that the smaller triangle had 1/4 the area of the bigger one. My friend tells me this is wrong. He says I am allowed to use calculus but I don’t understand how geometry would need calculus. Thanks for help.

You are right to think of the probabilities as areas, but the set of points closer to the center is not a triangle. It’s actually a weird shape with three curved edges, and the curves are parabolas.

The set of points equidistant from a line D and a fixed point F is a parabola. The point F is called the focus of the parabola, and the line D is called the directrix. You can read more about that here.

In your problem, if we think of the center of the triangle T as the focus, then we can extend each of the three edges to give three lines that correspond to the directrices of three parabolas. 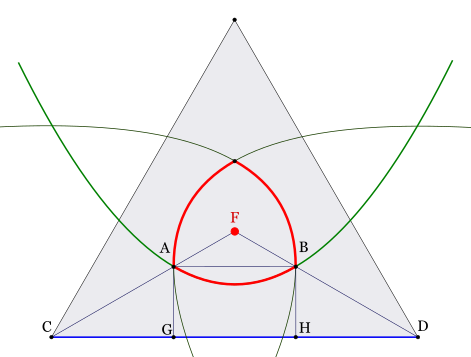 The probability you’re looking for is the same as the probability that a point chosen at random from △CFD is closer to F than to edge CD. The green parabola is the set of points that are the same distance to F as to edge CD.

Without loss of generality, we may assume that point C is the origin (0,0) and that the triangle has side length 1. Let f(x) be equation describing the parabola in green.

We know three points that the parabola f(x) passes through. This lets us create a system of equations with three variables (the coefficients of f(x)) and three equations. This gives