(Originally asked on MO by AJAY.)

What is the geometric, physical, or other meaning of the third derivative of a function at a point?

If you have interesting things to say about the meaning of the first and second derivatives, please do so.

I’ve found the time, so I deleted one of my original comments in the OP and decided to expand it into a full answer.

More specifically, if you remember the fact that four points uniquely determine a parabola, you can think of the osculating parabola as the limiting case of the parabola through four neighboring points of a given curve when those four points coalesce, or come together. The so-called aberrancy (a translation of the French “déviation“) is the tangent of the angle the axis of the osculating parabola makes with the normal line, and is given by the formula

where ϱ is the radius of curvature and ϕ is the tangential angle.

Here for instance is the cardioid (2cost+cos2t2sint+sin2t)T and its osculating parabola at t=2π/3: 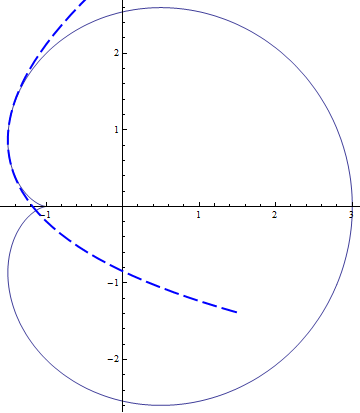 and an animation of the various osculating parabolas for the curve (3cost−2cos3t3sint−2sin3t)T:

A lot more information is in these two articles by Steven Schot (who also wrote a nice article on the “jerk”), and the references therein.