In the current COVID19 crisis it has become more sensible to plot the mortality in log base 2 given the steep exponential growth with doubling times of 2 days.

Recently, there has been a flattening of this log-linear plots in Italy and Spain.

This is the second derivative of the log transform of the original function (which is bound to be logistic) is negative, but decreasing in absolute value. Yet, these changes are still not quite apparent in the initial plot:

What is the mathematically precise interpretation of this change in the second derivative of the log transform of the data (we can assume a logistic curve)? Is the overlap in tendency as x increases just a product of the monotonicity of the function and its log transform?

I don’t have an elegant way of explaining this to myself, but simulating a logistic curve plateau-ing at $50$ cases in the course of $10$ days, makes it apparent the the binary log transform reaches a plateau earlier than the original function.

The plots are starting to show a similar shape with an incipient slow down in the number of deaths in Italy lagging behind the early indicator of a deceleration in the binary log of the number of cases:

There are a slew of epidemiological factors (clustering, isolation measures, use of PPE, uneven testing, ICU occupancy/overload, treatment improvements, etc) that make any extrapolation from the “back-of-the-envelop” first plot to the actual numbers fraught with pitfalls.

The area of maximal curvature in the log-linear plot in the actual curves in Italy is extremely subjective to pinpoint: notice the noise in the vector of second differences: 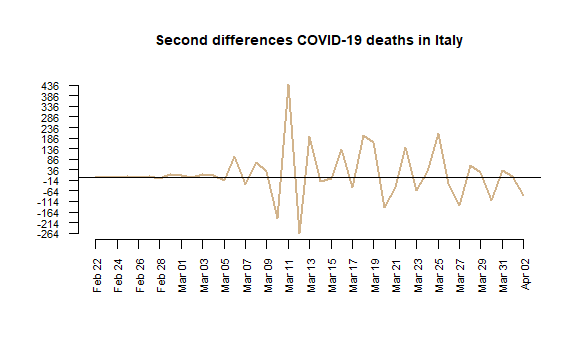 Around March 11 the biggest second differences were noted with a large peak surrounded by two dips, which suggest an accounting problem, rather than signaling a position slightly past the brown vertical line on the first plot.

Around March 25, which was some 20 days after the start of the accelerated phase of the epidemic there possibly lies a deceleration, which has already been noted in the news. But if this corresponds to the asymptotic tendency to zero in the second derivative of the log transform (first plot in blue), guessing at which point the nadir was reached in this second derivative of the log transform is anybody’s guess. There is, however, a suggestion that the sigmoid curve is starting to show its exponential decrease (left half of the second plot in blue).

Please note that the question is about the relationship of the derivatives of the log transform and the original logistic curve – It is not about fitting the data to a specific function, which is a fool’s errand as beautifully illustrated by Constance Crozier in this plot: