I know what “surface area” means for:

but I don’t know what it actually means for a sphere.

For a 2d shape

Suppose I’m given a 2d shape, such as a rectangle, or a triangle, or a drawing of a puddle. I can cut out a 1cm by 1cm piece of paper, and trace that piece of paper on the shape. Many full 1 cm squares will be traced on the shape, and there will likely be many partial squares traced on the edges of the shape. Suppose I can accept that I can “combine” the partial squares into full squares. Then I count the total number of full squares, to find the surface area.

For a cone or cylinder

I can convert a paper cone into two 2d shapes. The bottom of the cone is a circle. I can then cut the curved (ie not-bottom) part of the cone using scissors, and unfold that part into a flat 2d shape.

Similarly, I can convert a cylinder into flat 2d shapes: two circles and a rectangle.

But the above methods for understanding surface area don’t work for a sphere. I can’t lay a 1 cm by 1 cm piece of paper onto a sphere in a flat way. I can’t even trace a square centimetre onto the sphere using that piece of paper!

People might say, “suppose you have an orange, and you peel the orange. Then you can lay the peel flat onto the table, into a flat 2d shape”. But they’re lying! The orange peel can never be mashed down perfectly flat onto the table!

So, I don’t know what “surface area of a sphere” even means, if you cannot measure it using flat square pieces of paper!

What does “surface area of a sphere” even mean?

This is actually an interesting question. It involves how to define “area” on a curved surface. The examples you have provided are surfaces that are developable (can be flattened onto a plane) after a few cuts. And you can compute the flattened area. You can never do this to a sphere, because no matter how small a patch from a sphere is, it can never be flattened onto a plane. The idea is to break down the sphere to small patches such that each is flat enough and you compute the area as if it is flat, and then add up the areas of the patches.

Mathematically, suppose $S$ is a sphere. The above procedure is stated as:

P.S. For a visualization of this approximation, you can search online for sphere parametrization, or simply think of a football (soccer ball).

Update 1: Thanks to Leander, we have a visualization:

One might notice that this visualization is slightly different from cutting up a sphere; it takes sample points on the sphere and attach triangles to these sample points. I want to remark that there is no essential difference between this and my method. The idea is the same: approximation.

Update 2: A comment (by Tanner Swett) mention that the method of using a polygon mesh may be flawed. Indeed, the example of Schwarz lantern shows that some pathological choice of the polygon mesh may produce a limit different from the surface area. The following explanation should be helpful: 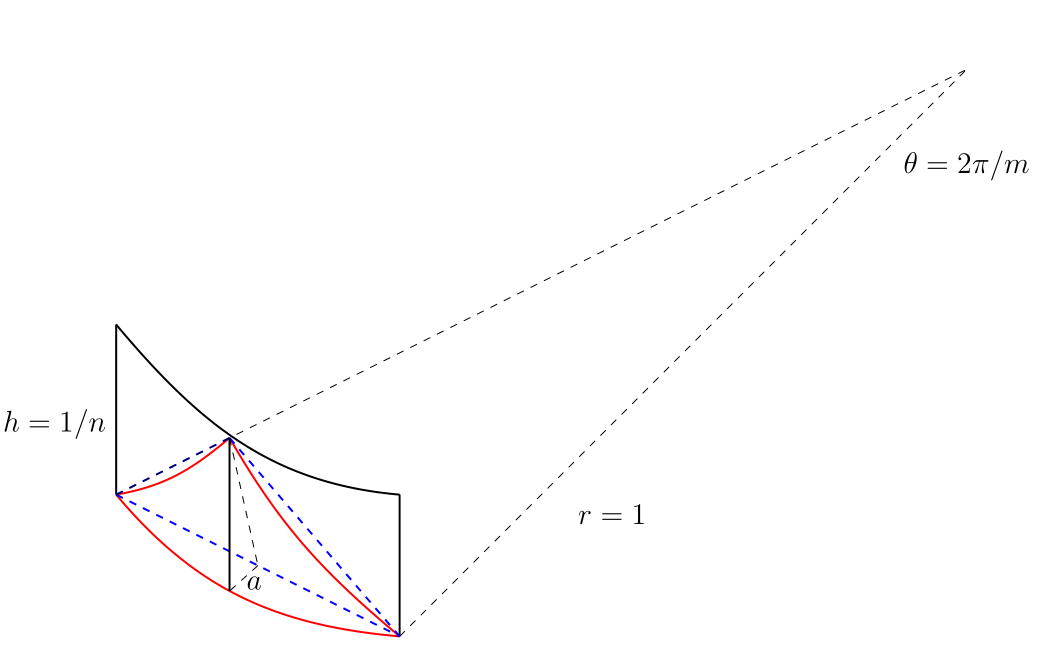 This problem would have a smaller probability of occurring in practice. Imagine if you do cut the cyclinder into patches, you’d use $h$ instead of $h_T$ to estimate the area. But again, it is hard to make this (what approximation is acceptable) precise without using the language of calculus.