In Thurston’s superb essay On proof and progress in mathematics, he makes this observation: 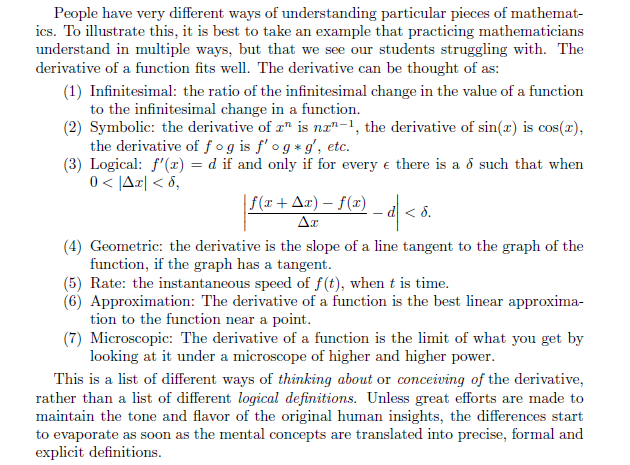 Of course there is always another subtlety to be gleaned, but I would like to at least think that I have absorbed the main intuition behind each element of the above list. However:

Differential geometry is not my strong suit, unfortunately, so I have had trouble trying to unravel this even at a formal level. Manifolds and vector bundles themselves I am comfortable with, but with connections and connection forms I have trouble moving between formalism and intuition, and “Lagrangian section” is not a term I’ve come across (though I can find its definition online).

So, I have some questions about Thurston’s 37th conception of the derivative:

My hope is also for answers that are as accessible to as many people as possible, though of course, any explanation has to assume some level of background knowledge.

Zev, I honestly think Thurston’s tongue was firmly implanted in his cheek when he wrote this. So the key point is that a connection on a vector bundle gives you (a) a means of differentiating sections (generalizing the covariant derivative for a Riemannian manifold as a connection on the tangent bundle) and (b) a notion of parallelism (generalizing the notion of parallel transport of tangent vectors).

As you suggested, the differential of f:D→R gives you a 1-form, hence a section of the cotangent bundle T∗D. With the standard symplectic structure on T∗D, Lagrangian sections (i.e., ones that pull back the symplectic 2-form to 0) are precisely closed 1-forms. [This is tautological: If qi are coordinates on D, a 1-form on D is given by ω=∑pidqi for some functions pi. By definition, dω=∑dpi∧dqi, and this is (negative of) the pullback by the section ω of the standard symplectic form ∑dqi∧dpi (with canonical coordinates (qi,pi) on T∗D).]

Now, a connection form on a rank k vector bundle E→M is a map ∇:Γ(E)→Γ(E⊗T∗M) (i.e., a map from sections to one-form valued sections) that satisfies the Leibniz rule ∇(gs)=dg⊗s+g∇s for all sections s and functions g. In general, one specifies this by covering M with open sets U over which E is trivial and giving on each U a gl(k)-valued 1-form, i.e., a k×k matrix of 1-forms; when we glue open sets these matrix-valued 1-forms have to transform in a certain way in order to glue together to give a well-defined ∇.

OK, so Thurston takes the trivial line bundle D×R. A connection is determined by taking the global section 1 and specifying ∇1 to be a certain 1-form on D. The standard flat connection will just take ∇1=0 and then ∇g=dg. I’m now going to have to take some liberties with what Thurston says, and perhaps someone can point out what I’m missing. Assume now that our given function f is nowhere 0 on D. We can now define a connection by taking ∇1=−df/f. Then the covariant derivative of the section given by the function f=f⊗1 [to which he refers as the graph of f] will be ∇(f⊗1)=df−f(df/f)=0, and so this section is parallel.