But even discarding the issue of commutativity, given some T instead of X_1\times_Y X_2 making the above diagram commute, I have no clue how to obtain a canonical map T \rightarrow X_1\times_Y X_2.

I could solve all the other problems in this section of his notes, but this one eludes me. Any help or solution (preferably just using the universal properties that we’re given) would be greatly appreciated.

First, why is the diagram commutative: you’ve got the following commutative diagram: 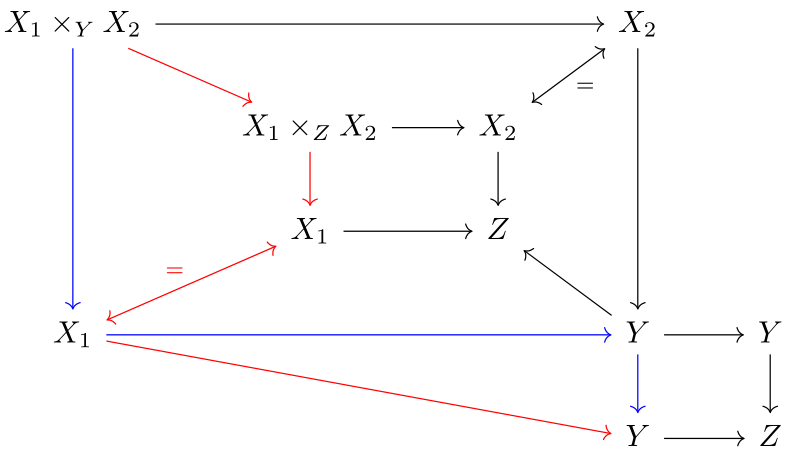 It is commutative precisely because this is how we defined the map X_1 \times_Y X_2 \to X_1 \times_Z X_2. The bottom right square is used to define Y \to Y \times_Z Y.

As you can see, they are equal. Therefore the magic diagram commutes.

Considering that Vakil introduces the Yoneda lemma after this exercise, I didn’t dare give the proof using it. But by the Yoneda lemma, you can just consider the case of sets; in the equations that you’ll write, you’ll arrive at the same conclusion — that giving a maps that make everything commute will give you a redundant condition that the images in Z are the same, and that the fibered product of the whole thing is the fibered product over Y.