Is there some natural or character-theoretic description of the minimum value of d such that G has a regular orbit on Ωd, where G is a finite group acting faithfully on a set Ω?

Motivation:
In some cases, there are so many kinds of orbits of G on Ω that every subgroup of G appears as a point-stabilizer. However, these actions are quite rare, even in the case of a point group of a group of Euclidean isometries. (The only such actions in 2D are C1, D1, and Cp for primes p. This follows because rotation subgroups only stabilize the origin.) 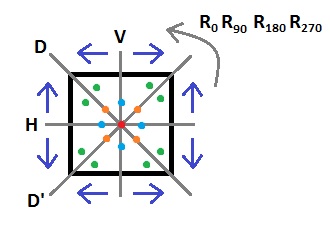 (example for D4 by Bill Cook).

If we allow the group to act on subsets too, then we may have better luck. See for instance, the lovely example of dihedral groups and cyclic groups acting naturally on the Euclidean plane as Rosette groups. Here one can take various natural subsets of the polygon to get all subgroups.

In general a finite point group of a group of Euclidean isometries has a regular orbit, and the blocks of that orbit suffice to specify all subgroups (there is a 1-1 correspondence between subgroups containing a point stabilizer and blocks of the orbit given, and this correspondence is given by the set-wise stabilizer). This is true more generally for small groups acting on large vector spaces (if V is n-dimensional over K and |G|−1 < 1+|K|+…+|K|n−1, then G has a regular orbit on V in any faithful, linear action of G on V; in particular finite groups acting on infinite vector spaces are fine).

However, determining which medium-ish linear groups over medium-ish vector spaces have regular orbits is really hard, as far as I know. I wondered if it was much easier if we allowed one to replace V by V ⊕ V. Certainly we can replace V by VV (taking d=|V|), but that is a bit extreme.

An expression for the minimum would be nice, but even some decent bound on d in terms of invariants would be fine.

To identify Galois groups, one also looks for certain invariants for polynomials, and I believe what I am asking is relevant to how complicated such invariants need to be. GAP for instance takes d ≤ 5, I think (and used to take d ≤ 3, I think), but it has lots of “backup” routines to identify various other subgroups, possibly for efficiency, but possibly because one cannot choose d that small in general.

This has been open for nearly nine years and is the top-rated unanswered question on Group Theory. So it deserves an answer, even though the questioner appears to no longer come round these parts.

First, something easy. Let $V$ be a $kG$-module, which we will assume is faithful.

The proof is clear: each element of prime order centralizes a proper subspace of $V$. Since $V$ is not the union of $m$ proper subspaces, there is a point $x$ not centralized by any element of order $p$. Thus $x$ lies in a regular orbit. (You can obviously do much better than $m$ here, but this is the easiest to state.)

If $V$ is a permutation module then $V=1\oplus W$, and $W\oplus W\leq V\otimes V$. Hence there is a regular orbit in $V^{\otimes 2}$. This of course generalizes to $V$ an arbitrary sum of modules, but we have to be a little careful to make sure that $V\otimes V$ is faithful.

I would guess that even when $V$ is simple that $G$ has a regular orbit on $V\otimes V$, but this has not been proved, as far as I know.

Having dealt with the coprime case, we look at the general case. Here the base size can be greater than $2$. Some recent papers of Melissa Lee give bounds on base sizes for quasisimple groups, but as far as I know this looks quite hard. Note that a result of Auslander–Carlson states that if $V$ is absolutely indecomposable and of dimension divisible by $p=\mathrm{char}(k)$, then $V\otimes V^*\otimes V$ contains $V\oplus V$. This means that in that situation we do obtain two summands isomorphic to $V$ in $V^{\otimes 3}$, whenever $V$ is self-dual. Thus we may exploit base sizes again. In general, of course, knowing composition factors of $V^{\otimes n}$ doesn’t help you too much, because you need composition factors of the socle to guarantee that you achieve a regular orbit.