Given a Cartan matrix associated to a Coxeter diagram, I can modify it by replacing one of the edges in the diagram with a long chain of vertices connected by simply laced edges; for example, this is where most of the infinite families of finite or affine diagrams come from.

Given a positive root of the root system associated to the original Cartan matrix, we can write it in the basis of simple roots, and thus (using the association of simple roots to vertices) as a function on the vertices. I’m interested in taking a root written in this way and similarly stretching it out to fit the extended Coxeter diagram by making the coefficients on the added vertices all the same, like so: 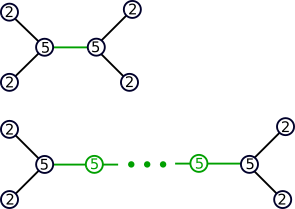 In particular, I’m interested in what happens to the hyperplane arrangement of shards (in the sense of Nathan Reading, introduced here) of a root constructed this way as the chain gets longer.

But before looking into that, I’d like to know in general if anything more is understood about how root systems behave under this extension.

EDIT, to expand a bit on my motivation: given a simply laced Coxeter diagram G and a particular positive root α, I can get all the Schur representations of dimension vector α of the preprojective algebra associated to G by applying reflection functors to simple representations, in a way mimicking the construction of α by applying simple reflections to a simple root. In types A and ˜A, I can cleanly describe all such representations attached to a particular root, but this gets way more complicated in other cases, even type D; the key distinction appears to be that all vertices in the former cases have degree 2. So I was wondering if, in the case that the Coxeter diagram has a long chain of degree 2 vertices, there are known examples of situations where some regular behavior of the root systems or anything attached to them can be extracted from that.

So I have a vague question and a specific question:

1) What previous work has been done on the behavior and stability of these families of root systems? I’m not sure how exactly to go about searching for it; the only thing my advisor and I could find was Homological stability for families of Coxeter groups, which goes in a different direction and doesn’t appear to have relevant references.

2) In an attempt to narrow down the (typically) infinitely many roots at play, suppose I restrict attention to roots (viewed as functions on the Coxeter diagram) with coefficients bounded by a particular number. How will the number of such bounded roots grow as the graph lengthens? Some preliminary number-crunching suggests it grows polynomially, and my hunch would be that there are some simple restrictions on the coefficients such that counting all the functions satisfying those restrictions is asymptotically close, but I’m not sure what kind of restrictions are appropriate.