Note that heuristically, if these numbers were equidistributed mod p we would expect each one to be zero (i.e., expect p to divide the result) with probability ≈1/p; presuming that all the values are independent (which seems a reasonable assumption), we shoud expect to have ∑p<n1p≈M+lnlnn of them less than n, where M is the Meissel-Mertens Constant — this sum is approximately 2.887 for n=106, so while we would heuristically ‘expect’ another one in that range it’s not surprising that there aren’t any, and despite the apparent lack of any more solutions, because of the divergence of the series the ‘expected’ number of solutions is still infinite!

Added: I put together my own software implementation in C++, confirming the results (that only p=3 and p=11 work) for p<5×105 but also looking at the distribution of results \mod p to see if any patterns arose. I computed the value of \dfrac{\sum_{1}^{p-1}i!\bmod p}{p} (the division by p serving to ‘normalize’ values into the range [0, 1) ) for all p in that range and then grouped them in bins; these are the plots with 100 bins and 256 bins. (These bin counts should be small enough relative to the prime values in consideration that there shouldn’t be any substantial aliasing effects in binning the data.) The results are a bit scattershot but there doesn’t appear to be any skew towards particular values (e.g. \frac{p-1}2) which would show up as a spike in the bins. If I have more time I may take a look at the square of the sum and particularly even the inverse of the sum \pmod p, but since the latter would actually require me writing a quick GCD algorithm to find the inverse it’ll have to wait for later.

(Note: the sharp drop at the last element is an artifact of my adding a 0 value to the end of the bin data so my spreadsheet didn’t automatically normalize the range; it’s not an actual value.) 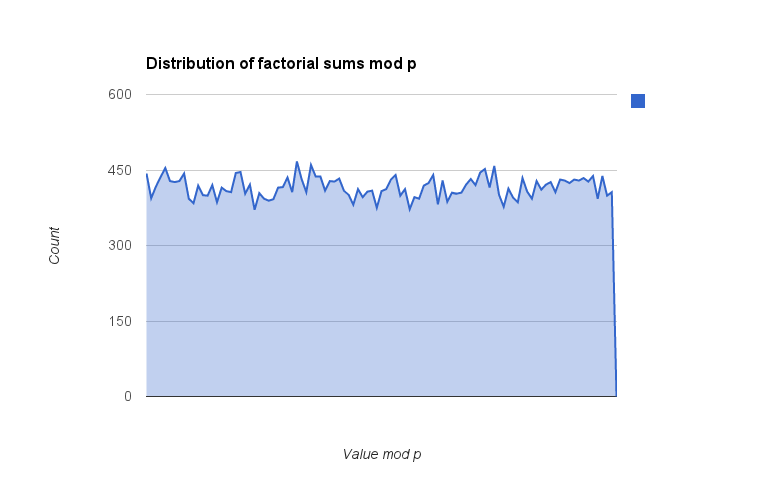 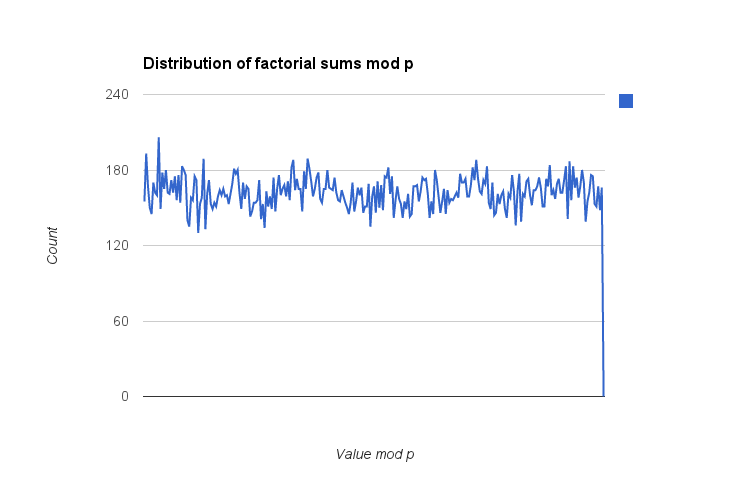