I recently asked a question regarding why homomorphisms and isomorphisms are important. The best answer to that question was actually a comment, which referred me to Brian M. Scott’s answer here: https://math.stackexchange.com/a/242370/115703

That answer was mind blowingly insightful for me. I finally began to understand why someone would care about homomorphisms, and why the “kernel” might actually be called a kernel. Revelation upon revelation. Frisson all over.

Why isn’t this sort of an explanation easy to find in algebra textbooks though? (I am reading Dummit and Foote, and Rotman) Shouldn’t this be the first thing a textbook says. Example:

Say we are interested in studying the structure of the odd and even numbers. If we look at it from the perspective of the set Z, then we are likely to carry on a lot of extra baggage since Z has more structure in it than just “odd and even”. What if studied the structure Z/2Z instead? Well, it would be useful then to have some sort of a mapping between Z and Z/2Z, since we are really studying integers, in a “reduced structure” setting. What sort of mappings might we be interested in… (ellipsis for a better way to explain the argument between where I have left off, and where I am going to, which eludes me right now) — so the concept of a homomorphism.

An isomorphism is just a homomorphism which preserves detail exactly — i.e. it doesn’t collapse any elements in Z into the “same” element in Z/2Z..– which is why its kernel is just the identity.

Actually, maybe instead of viewing homomorphisms and isomorphisms as structure preserving maps between groups, we should view them as generators of groups? i.e. given some group, and we construct something that is a homomorphism in order to explore a new group related to the old group, given that homomorphism?

A lot of what I have written is very “soft” and not formally fleshed out. Some parts are outright skipped over (ellipsis) because I still lack the wisdom to explain it well. Regardless, the point is that, when first learning these topics, in order to understand the definitions well, it would be very illuminating to read the “big picture” behind all the details that are about to follow.

Is there an abstract algebra text that provides this sort of illumination? Ideally, it such a text would also contain all the necessary proofs for formally defining a topic, but perhaps that is asking for too much?

Even more ideally, such a text would deal with most of abstract algebra (at least groups, rings and fields), but that might be asking for too much, again. So, perhaps recommendations can be split up into categories depending on which aspect of abstract algebra they tackle in particular.

I think I am now finally in some position to answer this question, but my answer will still be updated with time.

Let me begin by stating that recognizing isomorphisms and homomorphisms as definitions in their own right is non-trivial, and historically took much time to develop. From Stillwell’s Elements of Algebra (note that Stillwell is also the author of the equally fabulous Mathematics and its History):

The concepts of isomorphism and homomorphism emerged only gradually in algebra, being observed first for groups around 1830, for fields around 1870 and
for rings around 1920. In his memoir on the solvability of equations, Galois [1831] implicitly analysed groups by means of homomorphisms…

I don’t know why Jordan chose the words he did for those concepts, but I recently put up a question to figure out why.

It is curious to note that “homomorphism” is first used in Stillwell’s Elements of Algebra in the context of rings, where:

I suppose Stillwell’s book is a little odd in general because it takes the reader from rings to fields, and then finally groups.

Anyway, let us now shift our attention to Pinter’s A Book of Abstract Algebra. In Pinter’s book, Groups are introduced in Chapter 3, but homomorphisms are first discussed as a concept in their own right in Chapter 14. Here, Pinter tell us:

…This notion of homomorphism is one of the skeleton keys of algebra, and this chapter is devoted to explaining it and defining it precisely.

It’s not difficult to define homomorphisms precisely, but the fact that Pinter considers this concept to be deep, and its value not immediately apparent from its definition alone gives us hope. He continues (empahsis retained from text):

The function f:Z↦P [where P={e,o}] which carries every even integer to e and every odd integer to o is…a homomorphism from Z to P.

…Now, what do P and Z have in common? P is a much smaller group than Z, therefore it is not surprising that very few properties of the integers are to be found in P. Nevertheless, one aspect of the structure of Z is retained absolutely intact in P, namely the structure of the odd and even numbers. (The fact of being odd or even is called the parity of integers.) In other words, as we pass from Z to P we deliberately lose every aspect of the integers except their parity; their parity alone (with its arithmetic) is retained, and faithfully preserved.

Another example will make this point clearer. Remember that D4 is the
group of the symmetries of the square. 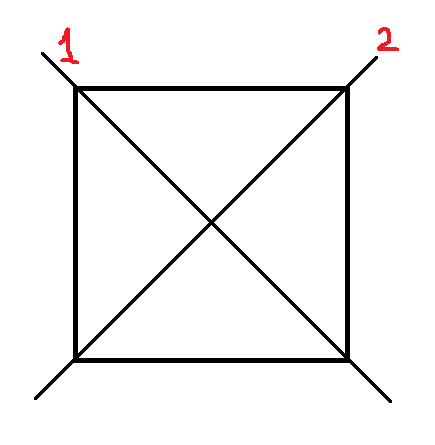 …S2 is a homomorphic image of D4. Now, S2 is a smaller
group than D4, and therefore very few of the features of D4 are to be found in S2. Nevertheless, one aspect of the structure of D4 is retained absolutely intact in S2, namely the diagonal motions. Thus, as we pass from D4 to S2 we deliberately lose every aspect of plane motions except the motions of the diagonals; these alone are retained and faithfully preserved.

A final example may be of some help…The most basic way of transmitting information is to code it into strings of 0s and 1s, such as 0010111, 1010011, etc. [called “binary words”]…The symbol Bn designates the group consisting of all binary words of length n, with an operation of addition [bitwise OR]…

Consider the function f:B7↦B5 which consists of dropping the last two digits of every seven-digit word. This kind of function arises in many practical situations: for example, it frequently happens that the first five digits of a word carry the message while the last two digits are an error check. Thus, f separates the message from the error check.

It is easy to verify that f is a homomorphism, hence is a homomorphic
image of B7. As we pass from B7 to B5, the message component of words in B7 is exactly preserved while the error check is deliberately lost.

Need I say more? No, I do not need to say more, but I will: Pinter’s book is awesome. I surveyed a few abstract algebra books over the past month, and this is the only one I found that gives importance to the concept of isomorphism/homomorphism (quite common in algebra texts), and helps give the reader a flavour of why the concept is important (very rare in algebra texts).

If you find more books that pass the “how well do they explain homomorphisms?” litmus test, please share!

Something extra, to complete the picture of homomorphisms: it is a very good strategy, when studying something complex, to identify and label only the most salient features of the structure we are interested in. Here is some justification for this from a problem solving perspective, in a lecture by Edsger Dijkstra (the Dijkstra in Dijkstra’s algorithm; just check out the goat, wolf and cabbage example, which is the very first one): https://www.youtube.com/watch?v=0kXjl2e6qD0