I’ve observed a possible characterization and a possible parametrization of the pattern, and I’ve additionally rewritten the entire post with more details and better definitions.

It remains to prove the observed possible characterization, and then complete it by finding the sequences for locations of the “parabolic shapes” that live in the characterized regions.

Here I will explain how we can visualize positive integers in an interesting way which also has the property that the factorization of n is encoded into it in the form of a fractal-like pattern.

We say that a positive integer is palindromic in some integer number base (number-system) b≥2 if when written in that number base, its digits are read the same forward and backwards.

Factorizations of positive integers n are related to 2-digit palindromes. That is, if n can be factorized as n=p⋅q where p<q−1, this means that n is a 2-digit palindrome in the number base q−1, which we write as:

Representing n∈N as a sum of n×n images (matrices)

First we define a "matrix of point", then we define the "sum" of these matrices.

Where the green pixels represent the matrix entries that are 1.

and that if we look at Pn(x0,y0) in some other point, we get continuations of these lines.

Visualization of the "image of n" matrix

We define Nn(y0)=∞∑k=0Pn(k,y0) as "entry-wise sum of Pn's along the x-axis at level y0". Notice that this sum always sums finitely many matrices because for large enough k=x0, all entries of the matrix are 0.

To visualize Nn(y0) we will color all 0 entries white, and all other entries blue. This visualization remains the same for all y0≥1 except in the top left entry which is zero only for y0=1. If we choose y0=0, then the visualization is "degenerated".

For example, below is the image showing the Nn's for n=7,…,31. Notice that the prime numbers are solid blue squares with no additional details, and that other numbers have visualizations that correspond to their factorizations. 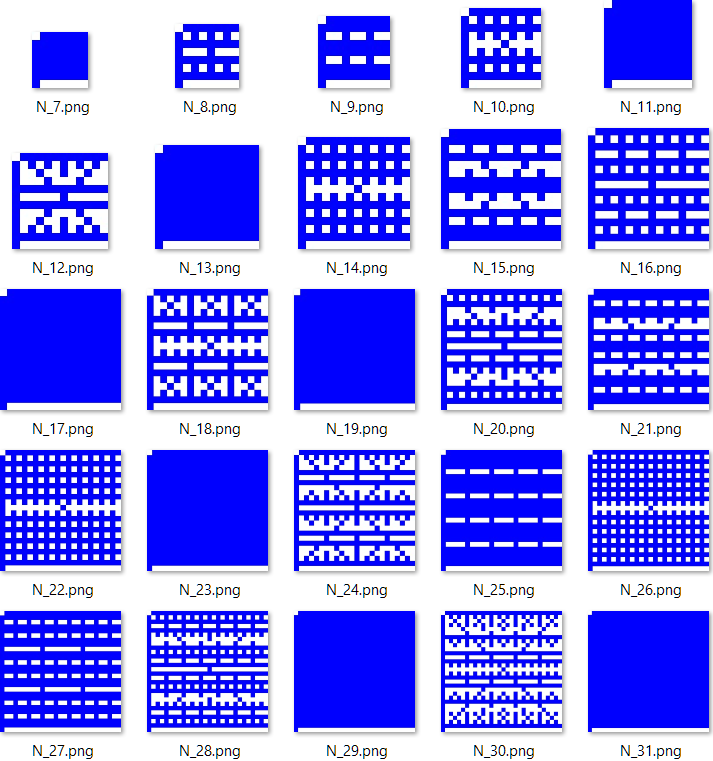 Patterns in Nn based on factorizations of n

For example, notice that even semi-primes n=2p where p is prime, all have the following look:

Or for example, notice that squares of primes n=p2 have the least details:

One might ask if we can for n in general compute the matrix Nn more efficiently than calculating and summing up all those Pn's. That is, is there an efficient test to get a Nn(x,y) entry directly? − This question does not need to be answered, it's just my thought on the current chapter.

Recall that we are WLOG observing y0=1 because all y0≥1 yield equivalent images.

At first glance these appear to be different sizes of the same image, but this is not the case.

Within different Mp's we find different patterns in certain regions of the image. Thanks to Hyperplane's comment, we can "enhance" these regions by removing the needless details.

That is, if we ignore the last row then these ¯Np's appear to be symmetric along the central horizontal line. In other words, if an entry (x,y) is red then the mirrored entry (x,|p−y−2|) is yellow, and vice versa. However, this is not true for all entries.

This motivates us to observe the "non-mirrored" entries, and set the other ones to 0.

The pattern inside prime number p

We will observe the irregularities in the "heat-image". That is, we define a new matrix Mp:

We will represent these entries by coloring 1's and 0's with white and black, respectively.

For example, zooming into the central horizontal line of 109 shows

It also turns out that these are not the only "parabolic" groups of pixels that exist. I've tried tracing the prime p=101 from different groups of pixels and found a set of three distinct parabolas. Observe the last (fourth) image below.

These have one of the following "shapes" of pixels at their "head":

Note that these "shapes" are mirrored below/above the central horizontal line.

All 6 permutations of these "shapes" can appear in some prime number p (in some Mp). Depending on the permutation that appears in the image (the matrix), we can determine if the prime number is of form p=18k+m where m∈{−1,1,5,7,11,13}.

The larger the prime p, the more of these regions we can find.

For example, in primes as large as p=997 I've highlighted four of these regions. Some regions repeat multiple times. For example, notice that there are four instances of the yellow region highlighted. 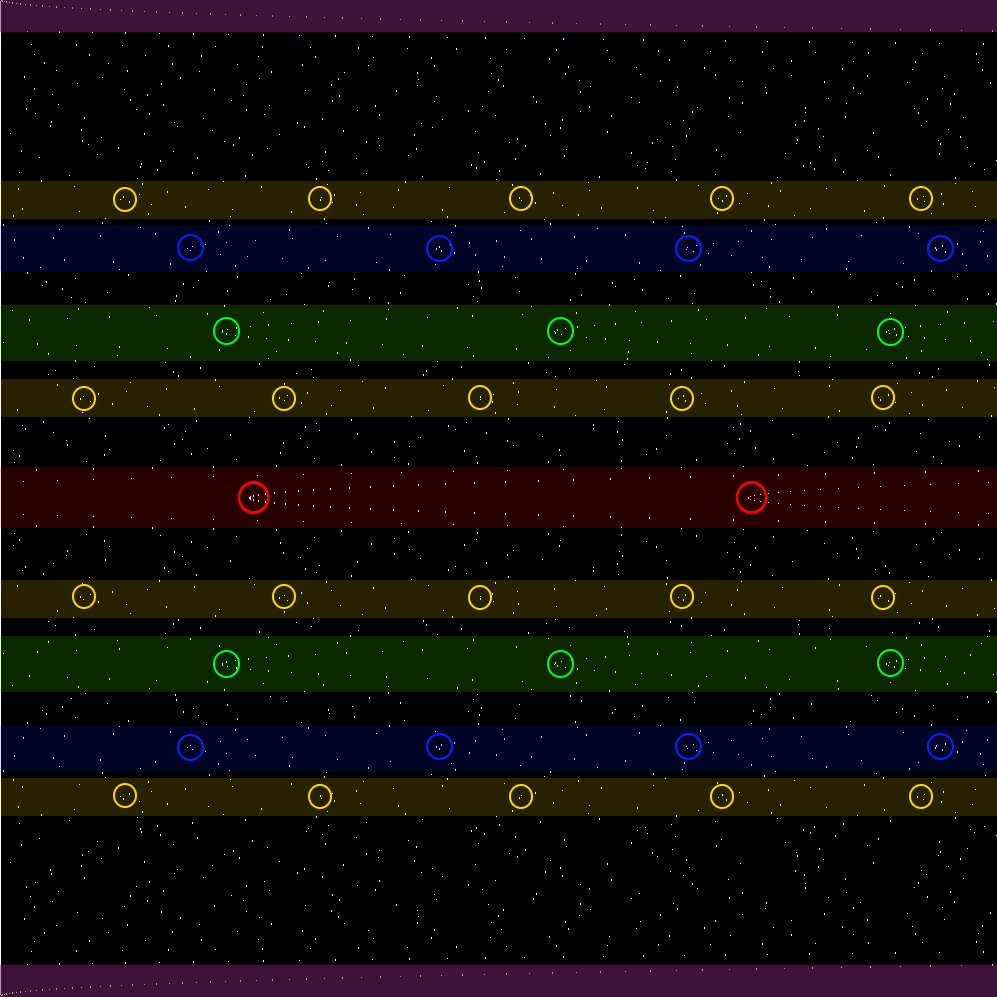 If the picture above isn't clear, we can alternatively color (highlight) the regions by connecting the pixels (entries) that represent ("belong to") corresponding "parabolic" shapes: 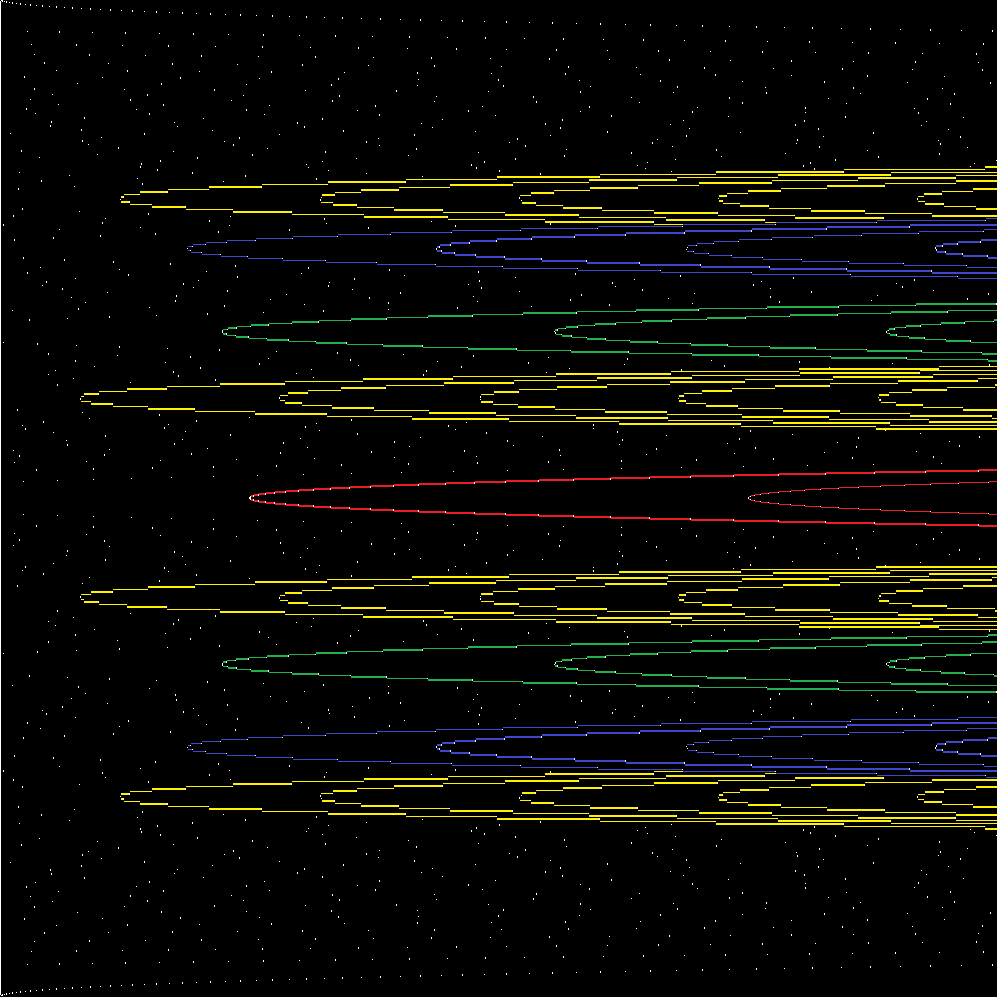 In every region R, we can observe a set of "parabolic" shapes. Different permutations of those shapes will appear in different primes p (in different Mp's), depending on the remainder m from division of p by some constant cR.

The question is now, can we characterize every such region and its shapes?

The pattern and the question

I think I'm having a hard time characterizing all these regions, because I'm actually not sure how to properly define them.

Essentially, it appears Mp contains "regions Rs" and within those regions we can find one of the possible permutations P=(p(s)1,p(s)2,…,p(s)s) of s "parabolic shapes".

It seems that region Rs contains some permutation Pm if and only if p\equiv m\pmod{c_s} where c_s is some constant related to the sth region.

The "pattern inside a prime p" would be the collection of all regions R_s of the matrix M_p.

Note that this is related to Moiré pattern's, as this user pointed out.

Below are the regions I've observed so far.

In every M_p, if you look either at the very top or at the very bottom, you will find the same "half-parabola" shape p^{(1)}_1. This gives the trivial region:

That is, there is only one possible permutation within R_1, and every prime p has it.

This region splits the primes into two sets.

This region splits the primes into six sets. Unlike R_2 that appears only once, this R_3 region appears twice in the image: above and (mirrored) below the central horizontal line.

Interestingly, not all permutations of four shapes are possible to appear in this region. That is, we can see that only 8 out of theoretical 24=4! appear. Also notice that we alternate even and odd numbers ("short" and "long" shapes) in all of these permutations.

So far, I've been manually tracing pixels in many consecutive primes to observe these regions and their permutations. Can we characterize these regions more efficiently?

Notice that a pattern emerges here. The c_s appears to follow the sequence:

In other words, it appears that only the permutations (of "parabolic" shapes \{1, 2, 3, \dots, s\}) that are "in arithmetic progressions modulo s" can exist within the R_s region!

Can we prove that this holds for all s?

Beside finding how the individual parabolic shapes permute within corresponding regions, we also need to find their exact locations within those regions, to complete the characterization.

An interesting question that we can ask is, can we color every pixel (entry) (x,y) such that it belongs to exactly one (or two neighbouring) regions R_s?

That is, (x,y) should belong to a region if it is a part of a shape that is being permuted in that region, or if it "extends" one of those shapes up to the border of a neighbouring region.

I've decided to color R_1,R_2,R_3,R_4 with \color{purple}{\text{purple}},\color{red}{\text{red}},\color{green}{\text{green}},\color{blue}{\text{blue}}, respectively. I'll use white to color pixels that "overlap" (could be in either region) or those that "are forming next region".

The first three regions are already visible in these small primes.

Observing the next few primes p=29,31,37,41, we see that the fourth region emerges too, but still intersects the third region at some parts.

It is at primes p=43,47,53 when the fourth region should be clearly visible for the first time.

The fifth region and beyond will appear at a bit larger primes.

If we want to be able to color larger examples, we need to first characterize the regions (answer my first question) and then we need to be able to additionally determine their exact locations within the corresponding region.

Question. 2. Can we determine locations for the parabolic shapes for given R_s region?

I've looked at R_2 (first nontrivial region), and it is not hard to see where exactly the two corresponding parabolic shapes will appear. This allowed me to come up with the parametrization of the entire pattern (matrix M_p) and is presented in the following chapter.

The central region R_2 can be used to generate the entire matrix M_p. This is much more efficient than computing it and might shed some light on the pattern.

That is, all regions R_s emerge from the following parametrization.

where the "mod" takes values in \{-1,1\} as noted. To generate M_p, we start with a matrix of 0's and fill in the 1's with the following sequences, where the "mod" now takes nonnegative values:

where the starting conditions are:

A sequence terminates after its y coordinate leaves the [0,p) interval.

These sequences represent extensions of the "thick" and "thin" parabolas from R_2, that loop around the right and left edges of the image (matrix) up until the top (bottom).

Can we use this to help us predict the characterizations of regions R_s?

I would put this in the comments, but I don't have enough points.

The patterns you are seeing are Moiré patterns. From wikipedia:

In mathematics, physics, and art, a moiré pattern (/mwɑːrˈeɪ/; French: [mwaʁe]) or moiré fringes are large scale interference patterns that can be produced when an opaque ruled pattern with transparent gaps is overlaid on another similar pattern. For the moiré interference pattern to appear, the two patterns must not be completely identical in that they must be displaced, rotated, etc., or have different but similar pitch.

This is a broad topic with lots of different approaches and applications, so I encourage you to research it.

In terms of finding equations to the patterns you are seeing, Mathematica is great for this. If you don't have Mathematica, you can use Wolfram Alpha. Here is an example with a list of numbers using findsequencefunction. You can also provide a list of points (generally, wolfram alpha needs five or more points to find a sequence):