Background: I work for an Ambulance service. We are one of the largest ambulance services in the world. We have a dispatch system that will always send the closest ambulance to any emergency call. There is a belief that this results in the fastest response time as an average across the system.

Example: Suppose we have the following simplified scenario. We have 3 ambulances available (labelled A, B and C). At any given point in time, there is an random chance of an emergency call originating equally anywhere inside this box: 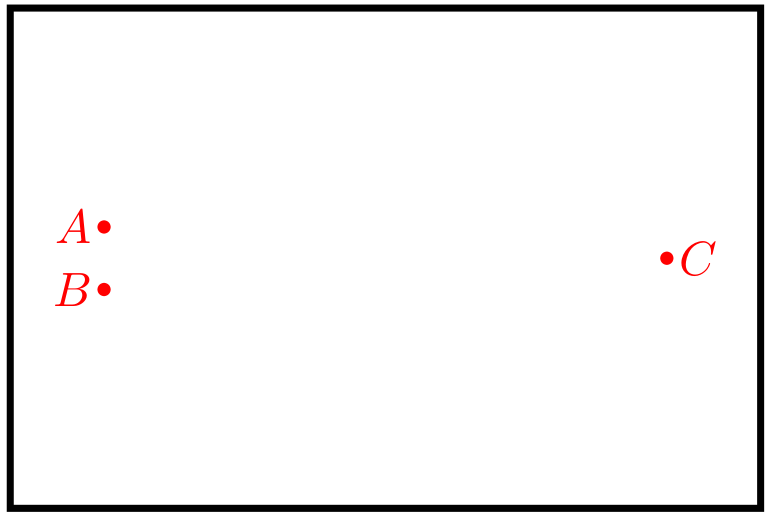 If an emergency job appears (labelled 1), we will send the closest ambulance (in this case Ambulance C) 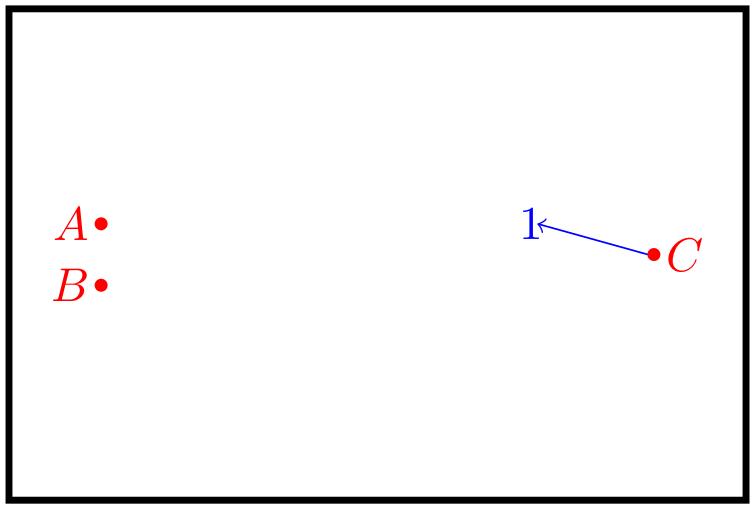 You will notice that Ambulances A and B are very close together on the left side of the box (lets pretend they are just leaving a hospital after dropping off their patients). There is now a large gap on the right. Suppose a small amount of time passes, and another emergency call drops in (labelled 2). 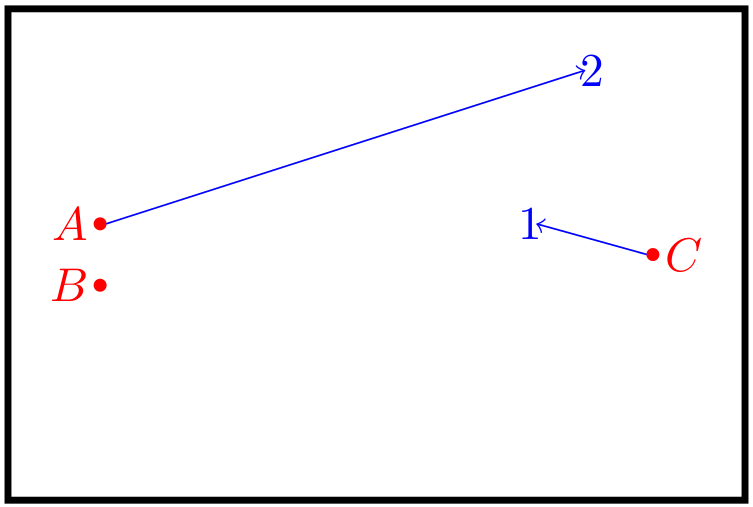 Ambulance C is no longer available, so you must use Ambulance A or B. They have a significantly longer distance to travel to reach incident 2. In this case we have sent Ambulance A to the job.

Hypothesis: If you always send the closest ambulance to an emergency call, you will have the quickest response time to that specific call, but the overall average response time of the ambulance service is not optimised.

Using that hypothesis – it would seem to be better to send Ambulance A or B to the original incident 1. This would mean the the next incident to happen, there will be “on average” a significantly shorter distance for the next ambulance to travel. 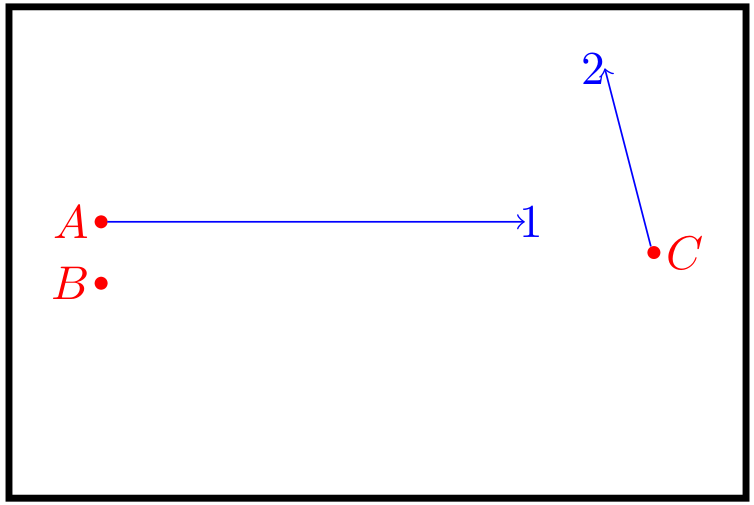 Question: How can I “prove” this? Is there a mathematical theory or formula? This is obviously a simplifed scenario, there are some other issues – but I just need to prove the fundamental issue that the “closest ambulance being sent to the next incident” actually results in a non-optimal response time across the system as a whole.

To answer some generic concerns:

“Just move A to C’s location after C goes on the job”
Yes – we already try to do this – however there is often another “incident” before A gets into the new position. And for other reasons {which are beyond this question} it is not always an option.

“Why are A+B so close together? Perhaps B should be elsewhere?”
There are lots of reasons for ambulances to be ‘clumped’ together. The main reason is they have probably just offloaded a patient at a hospital – this often causes uneven dispersal of ambulances resources. Other reasons include the physical locations of our stations/depots.

“Volume of work”
We are one of the largest ambulance services in the world. In my scenario I have 3 ambulances. In reality there are approx 100 ambulances, and we service approx 2000 “incidents” per day in our main metropolitan area. At some points in time we run at very high capacity – i.e. almost every ambulance is on an ‘incident’ – so applying a optimal response strategy across the system will have a significant impact to our response times.

“Ethics of not sending closest ambulance”
Yes – this is not just a mathematical issue. But for the purpose of this Stack Exchange, please limit responses to a mathematical answer. In regards to ethics, I would suggest that if we can lower the “overall” response time (i.e. from 12mins to 10min average) – then “overall” we are ethically providing the best service. If we use a sub-optimal response, and “overall” we provide a slower response, then is not a bad ethical decision? Also – there would probably be exceptions to the rule (i.e. a heart attack or choking would ALWAYS get the closet ambulance – because seconds matter. But for this scenario lets not make it complicated)

Operations problems like this are tricky, because they always include a large element of uncertainty.

In these cases, you have to consider the probability distribution of events as a spatio-temporal process. In such a case, you may construct an algorithm for dispatching emergency services that is almost never optimal for any isolated case, but is globally optimal over all possible cases!

Here is an example: say that your region is circular, and that events only happen on the circumference. Your job is to determine where inside the circle to position your only ambulance. If the distribution of emergency events is uniformly distributed over the circumference, the solution is clearly to position the ambulance at the center of the circle. However, this solution is not optimal for any individual event.

Your question is to prove that the closest ambulance first scheme is not optimal “across the system as a whole.” In order to prove that, you need to establish that the probability of a second event happening closer to $C$’s original position than any other ambulance within the time it takes for $C$ to complete its call is higher than not.

If the process is truly Poisson (i.e. completely spatially random in a 2-D region), then this process is simple — the area of $C$’s Voronoi tessellation would need to be greater than half of the area of your district, assuming that the process intensity is such that the expected call time is short enough that only one event happens on average with Poisson intensity $\lambda$.

Let’s say that you run an ambulance service in Squareville, Australia. This city is completely flat, square, has no roads, and is one unit wide by one unit high.

Let’s say in an hour, $n$ events occur. The area of Squareville is 1 square unit. This leaves us with an average spatial intensity of $n$ events/unit area. This is known as the intensity factor, or Poisson parameter, often called $\lambda$ and is equivalent to both the mean and variance of the distribution.

If you look at the number of events that occur in this region, the average number will be $\lambda a$ — the global probability, times the area of Squareville Heights. This turns out to be exactly $100a$ percent of the events.

We can look at this another way.

Let’s take an hour, and chop it into small intervals $dt$ that are small enough that in any finite region of the city, no more than one emergency will occur. The probability of this emergency happening in Squareville Heights is exactly $a$.

Let’s say we have $k$ ambulances distributed somehow throughout Squareville. We want to investigate the probabilities of events happening closer to one ambulance than to another. It turns out this is very easy.

Let $A$ be the co-ordinates of your ambulances. The Voronoi tesselation of a point pattern, $V(A)$, is a set of 2D regions such that each $v_i$ in $V(A)$ is the subset of Squareville such that every point in $v_i$ is closer to ambulance $a_i$ than to any other ambulance.

If an emergency happens in $v_i$, then $a_i$ will be the closest ambulance to the event.

As a result, we can then compute — in this trivially simplified case — the probability that sending $a_2$ to the first call would be better than $a_1$.

In this case, there is a $|v_1|$ percent chance that holding $a_1$ and sending $a_2$ to the first call will result in a response-time reduction for the second call.

If the ambulances are also randomly distributed, the mean areas of the tiles will be about .33; however, operationally, the distribution of ambulances is not Poisson, so you will probably have some ambulances that possess relatively large Voronoi tiles.