The (spherical) loxodrome, or the rhumb line, is the curve of constant bearing on the sphere; that is, it is the spherical curve that cuts the meridians of the sphere at a constant angle. A more picturesque way of putting it is that if one wants to travel from one point of a (spherical) globe to the antipodal point (say, from the North Pole to the South Pole) in a fixed direction, the path one would be taking on the globe would be a loxodrome.

For a unit sphere, the loxodrome that cuts the meridians at an angle $\varphi\in\left(0,90^\circ\right]$ is given by 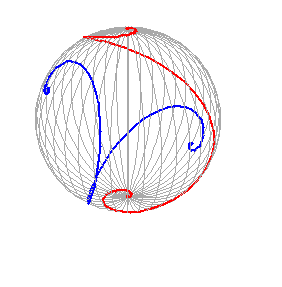 On the other hand, for the (extreme!) case of $\varphi=90^{\circ}$, the two loxodromes degenerate to great circles, and it is well known that two great circles must always intersect (at two antipodal points).

Less extreme, but seemingly difficult, would be the problem of positioning two 80° loxodromes such that they do not intersect: 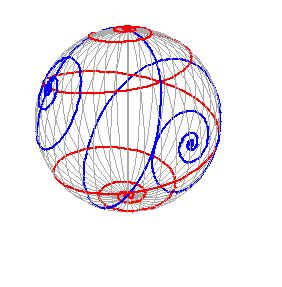 This brings me to my first question:

1) For what values of $\varphi$ does it become impossible to orient two loxodromes such that they do not cross each other?

For simplicity, one can of course fix one of the two loxodromes to go from the North Pole to the South Pole, and try to orient the other loxodrome so that it does not cross the fixed loxodrome.

That’s the simpler version of my actual problem. Some experimentation seems to indicate that it is not possible to orient three loxodromes such that they do not cross each other. So…

2) Is it true that for all (admissible) values of $\varphi$, one cannot position three loxodromes such that none of them cross each other?

I’ve tried a bit of searching around to see if the problem has been previously considered, but I have not had any luck. Any pointers to the literature will be appreciated. 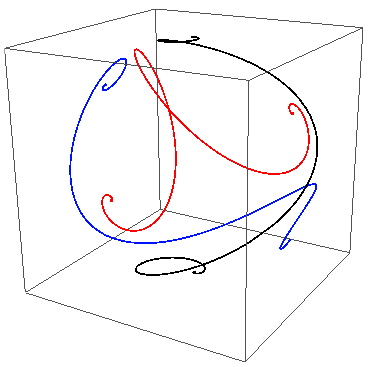 The axes are coplanar and inclined at $120^\circ$ to each other. This image shows that symmetry better: 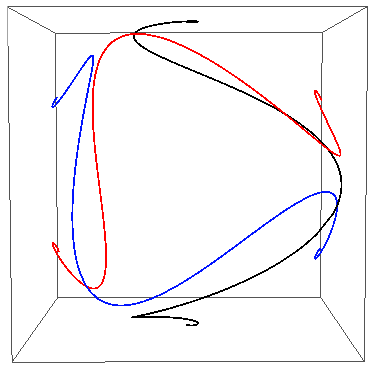 And here’s the Mercator projection: 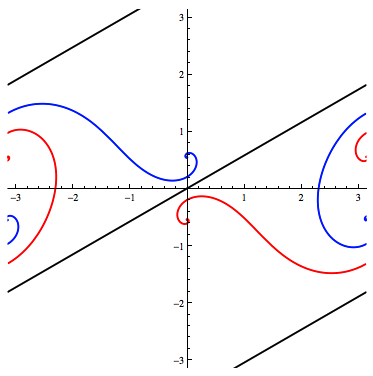 My approach was to plot one loxodrome such that its Mercator projection is a (black) line through the origin. Then, I tilted the spherical loxodrome “toward the camera”; that is, I rotated the sphere about the horizontal axis to get new, curvy (red) projections.

From tilt-angles $108^\circ$ to $143^\circ$, the “curve” lies between parts of the “line”, indicating a range of red loxodromes that don’t intersect the black one. 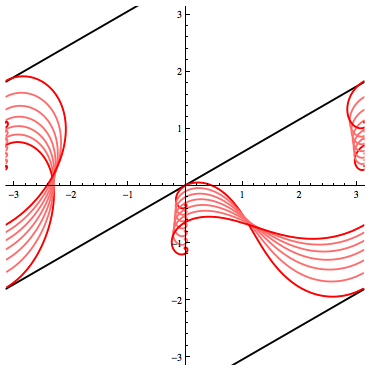 For a certain sub-range ($108^\circ$ to about $125^\circ$), a third (blue) non-intersecting loxodrome can be added by rotating the red one about the Mercator origin. Here’s an image from the end of that range, where red and blue are tangent. 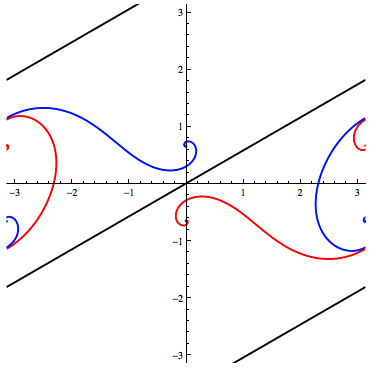 That’s the end of the illustrated intro. Now for some equations …

A tilted loxodrome crosses into the range of (possible) non-intersection with the un-tilted loxodrome when the “top” of the outer loop about its tilted north pole meets the Mercator origin. (The nature of loxodromes guarantees that the two loxodromes will be tangent there.) The point on the loop corresponds to $t=\pi$, for which $u$ is already zero; for $v$ to vanish, we must have

Consequently, appropriately adjusting the “branch” of $\rm{atan}$, the range begins at

The range of (possible) non-intersection ends when the loop around the tilted loxodrome’s south pole brushes against the un-tilted loxodrome. This is when the point corresponding to $t=-\pi$ has $v = \pi\cot\phi$ (matching the upper-right point of the “straight” loxodrome projection). So, the range ends at

I write “range of possible non-intersection”, because that range collapses when $\theta_0 = \theta_1$. This gives us a critical loxodrome angle. 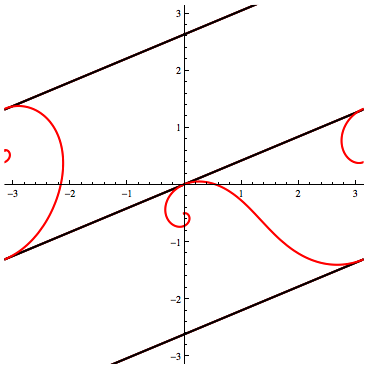 You cannot arrive at two non-intersecting loxodromes with $\phi > \phi_{*}$ –in particular, with $\phi=80^\circ$– by tilting one relative to the other in the way I’ve described.

Of course, “the way I’ve described” lacks generality. In addition to “vertical” tilts, one should also consider “lateral” spins (horizontal shifts in the Mercator projection). I’ll leave that, and a full investigation of the three-loxodrome scenario, as an exercise.