Let G=(V,E) be a graph with |E|=m of a graph class \mathcal{G}. A path-cover \mathcal{P}=\{P_1,\ldots,P_k\} is a partition of E into edge-disjoint simple paths. The size of the cover is \sigma(\mathcal{P})=k. I am interested in upper and lower bounds for the quantity

In other words, how large is the inverse of the average path length in the smallest path-cover in the worst case.

The graphs classes \mathcal{G} I am interested in are (1) planar 3-connected graphs, and (2) triangulations.

There is a simple observation for a lower bound: In every odd-degree vertex one path has to start/end. So when all vertices have odd degree there any path-cover needs at least m/6+1 paths (a triangulation has 3|V|-6 edges). You get the same result by noticing, that (n-1)/2 paths have to pass through a vertex of degree n-1.

Is a path-cover with \frac{m}{6} paths always possible for planar graphs?

I am aware of a few results covering planar graphs with paths of length 3.

Here is an example of a path-cover of the graph of the icosahedron. 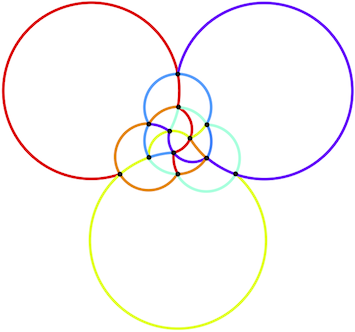 I will show that \frac{m}{6} is not enough for 3-connected planar graphs. The following is inspired by fedja’s comment (and also some nice discussion with Krystal Guo).

Consider the following graphs which we denote T_n:

It is not too hard to show that \sigma(T_n) = n+1 (and this is the best possible). One can show by induction, considering the left most edge between the upper and lower paths.