I recently began experimenting with gnuplot and I quickly made an interesting discovery. I plotted all of the prime numbers beneath 1 million in polar coordinates such that for every prime $p$, $(r,\theta) = (p,p)$. I was not expecting anything in particular, I was simply trying it out. The results are fascinating.

When looking at the primes beneath 30000, a spiral pattern can be seen: 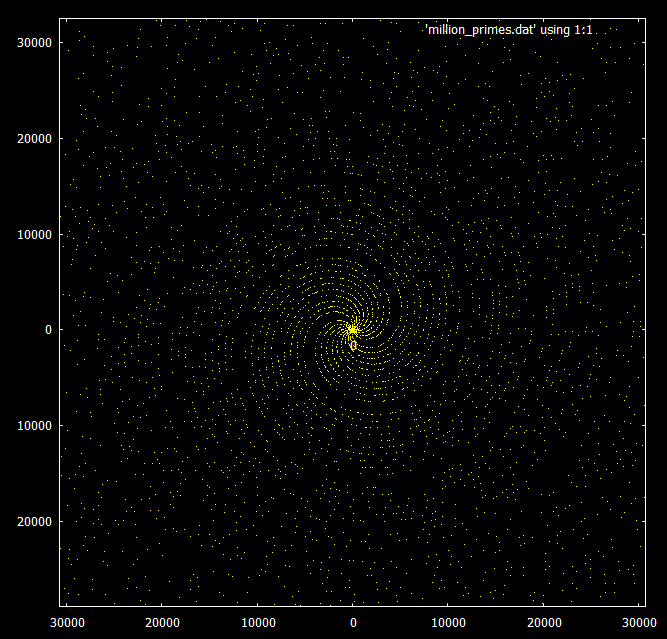 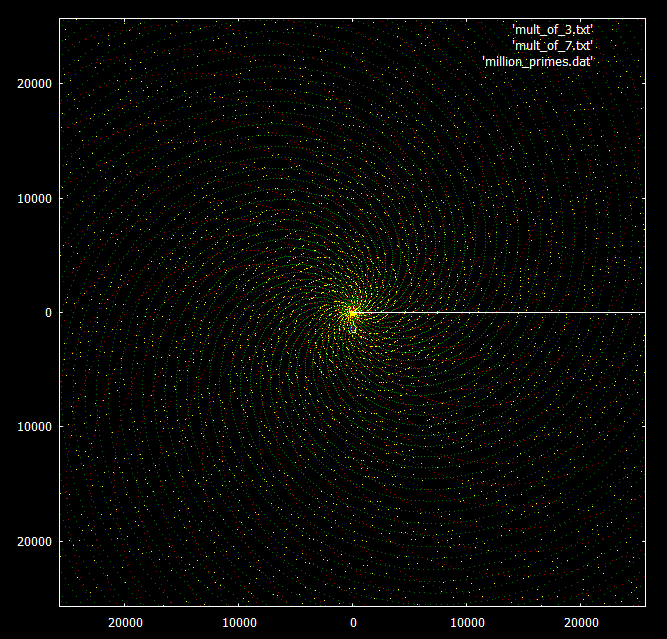 What is really interesting to me, though, is the behavior when the range is increased. Multiples of a given number appear to spiral out in the same pattern into infinity, but the primes begin to form rays in groups of 3 or 4. See below: 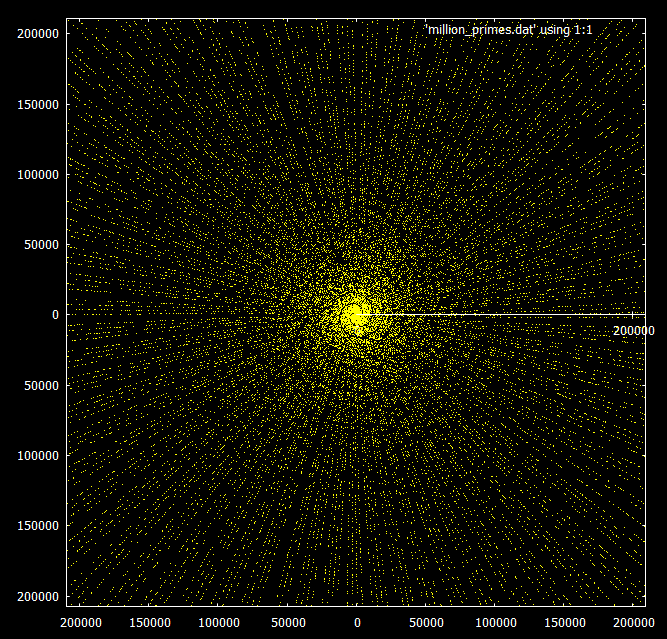 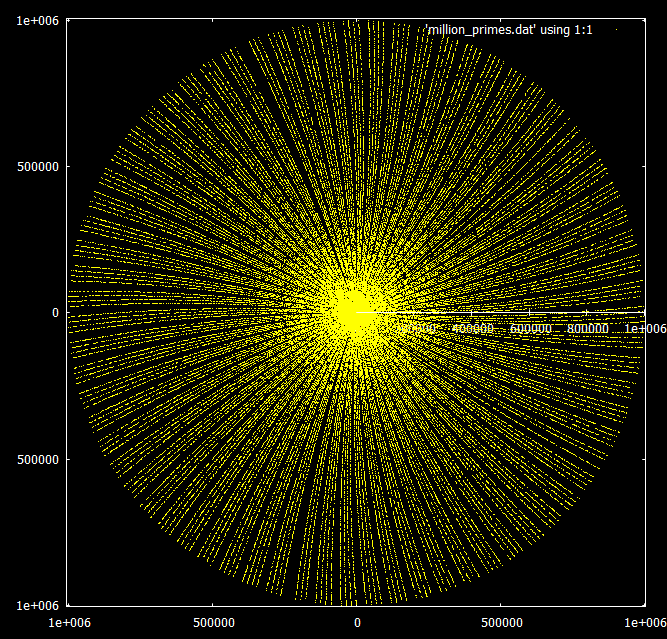 Compared to multiples of 3 and 7 again: 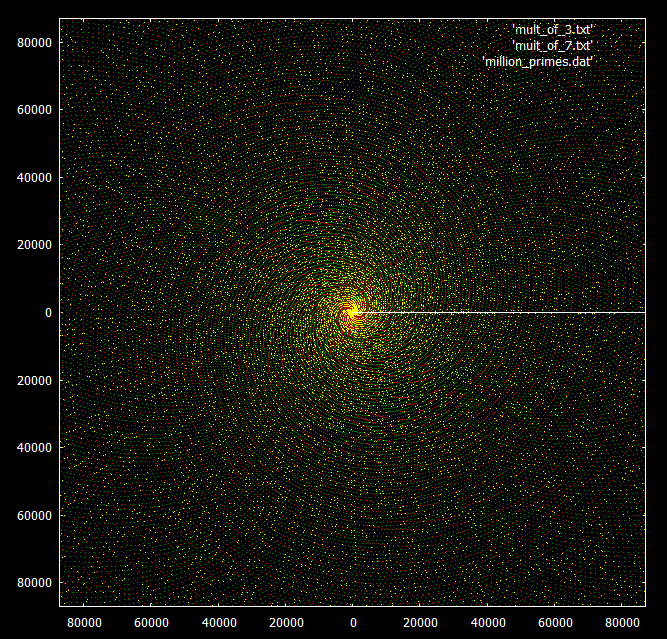 Now, I must admit that I am very much a novice mathematician with little experience beyond trigonometry. I am just going into Calculus and Discrete Mathematics this upcoming fall.

I know that there is something called the Prime Number theorem – are these patterns related to it? Are these rays the same phenomenon as the diagonal lines found in Ulam Spirals?

EDIT:
In response to Greg Martin’s explanation, I decided to add a couple more graphs. To see why they are relevant, read his answer. 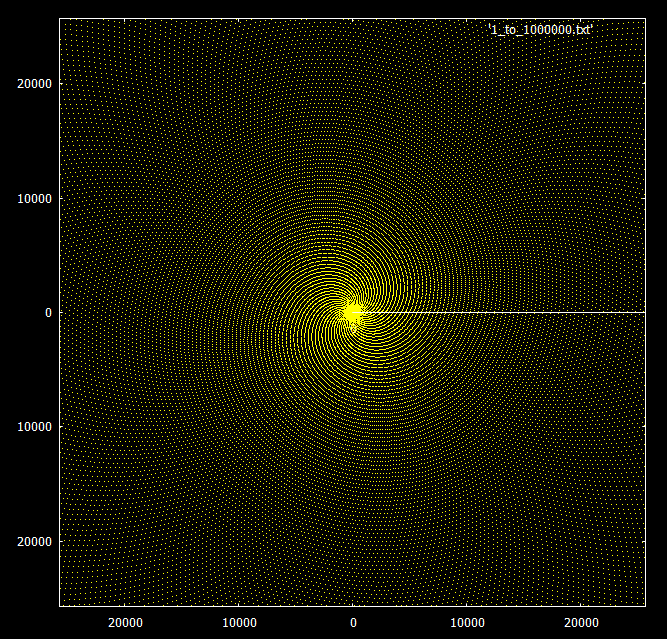 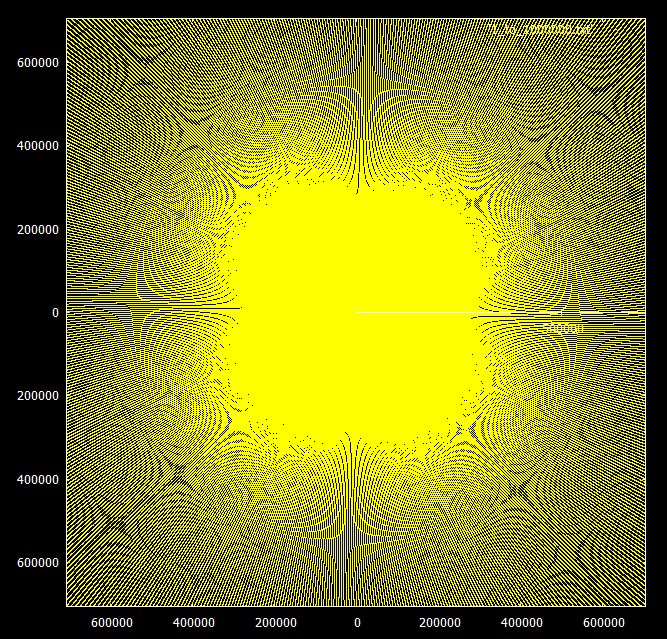 What we’re seeing is arithmetic progressions (not prime-producing polynomials) of primes, combined with a classical phenomenon about rational approximations.

If instead you plot only the primes $(p,p)$, you will get reasonable representation in the $\phi(44)=20$ spirals corresponding to arithmetic progressions $a\pmod{44}$ where $\gcd(a,44)=1$, and no primes in the other $24$ spirals. That’s what we’re seeing in the top two pictures.

As the scale moves farther out, these particular spirals become more tightly wound and harder to see (go from the 1st picture to the 5th, then the 3rd, then the 4th), and the next convergent takes over. In this case, the convergent $\frac{710}{113}$ is an extremely good rational approximation to $2\pi$ (as we know from the large partial quotient $146$). Therefore the integer points $(n,n)$ will group themselves into $710$ spirals, but these spirals are so close to straight lines at the beginning that they almost don’t look like spirals, and persist for a large interval of possible scales. Each ray thus corresponds to an arithmetic progression $a\pmod{710}$.