I am wondering if it is possible to use some kind of fixed-point theorem to characterise the limit (in any sense) limL→∞KL as an operator on some sequence space.

Edit:
I did some more experiments and it seems that the limiting behaviour of the singular values of KL does not only depend on the matrix H, but also on the initial value K1.

The largest singular value of K10(α) is depicted in the following figure. (The graph looks essentially the same for all L≥4 instead of L=10.) 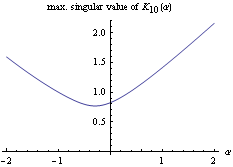 This makes it unlikely for fixed-point arguments to work in this setting. I, therefore, modify my question and ask if the limiting behaviour of the singular values of KL (or KL(α)) can be characterised directly in terms of H and the initial value K1 (or K1(α)).

Edit 2 (March 2015):
As the question is still receiving attention, let me add that I came up with a conjecture for the asymptotic behaviour of the singular values of KL(α), as detailed in this MO post.