Is zero a prime number?

When talking about prime numbers, it seems like the examples given (2,3,5,7,11,13,...) have the property that they have no factors less than themselves and greater than one. But 0 also has this property, so is it prime? If not, why not?

Is zero odd or even?

Is zero a number?

I’ve heard that every number is either odd or even, but if 0 is neither odd nor even, does that mean it isn’t even a number?

If you are willing to accept the integers as numbers, then you should have no trouble considering 0 a number. For one willing to define even numbers as “integer multiples of 2” then it’s similarly clear that 0 should be considered even. I don’t want to spend a lot of space here rehashing the evenness of 0 since there are already questions dedicated to that problem, but fortunately that makes it easy to direct you to the answer: Is zero odd or even?

I’ve also found some more discussions on the “numberness of zero” that you might find useful: What’s the hard part of zero? , Why do some people state that ‘Zero is not a number’?

The question as to whether or not it should be considered prime is more interesting.

What should primes be?

After you learn about divisibility and factorization, this idea arises about breaking numbers down into smaller parts (sort of like describing matter with smaller and smaller parts). Divisibility makes a partial order on the nonegative integers. This just means that since 12=3⋅4, the “smaller parts” 3 and 4 dividing 12, we can record this as 3≺12 and 4≺12. Furthermore 2≺4 because 2 divides 4, and so on. Since 1 divides everything, we would say that 1≺n for any nonegative integer n.

In physics, we are interested in the smallest things from which everything is built from (the “atoms”!). The idea of atoms has two parts:

Well, we can’t let 1 be such a thing, because it would be the only smallest thing, and moreover you can’t build anything from 1 alone. So it is in a sense, too simple.

The next best candidates are those things just above 1. What just above means becomes clearer if you draw a picture: 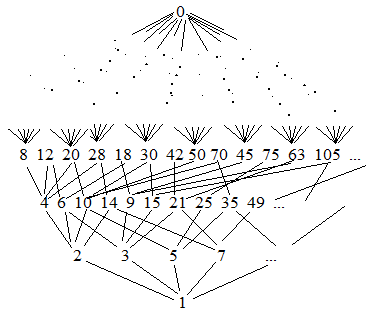 This is a sort of Hasse diagram for the nonnegative integers partially ordered by divisibility. Since the diagram is infinite it’s not really a Hasse diagram, and the lines to zero don’t really come from any numbers, but this is good for our purposes.

From the diagram you can easily see that the primes lie in the first row above 1, and so they are “as small as possible” without being 1, and moreover, everything above them (excepting zero) is built out of various combinations of the primes. The gradeschool definition of prime number basically amounts to the fact that nothing lies between 1 and p for each prime.

Zero, paradoxically, is really aloof and nowhere near the rest of the primes: he doesn’t seem very small after all. Moreover he is pretty useless for building numbers since 0n=0 for any n.

So for reasons like these, 0 is not considered as a prime: he doesn’t make a good “atom.”