I have a confession to make: none of the proofs of Sylow’s theorems I saw clicked with me. My first abstract algebra courses were more on the algebraic side (without mention of group actions and geometric motivation for groups, except hastily mentioned dihedral groups), so when I (in self-study) discovered interplay between geometry and group theory, I was delighted. Many concepts and ideas suddenly made more sense to me.

I see Sylow’s theorems as an useful technical black box, which can help you characterize groups when you only know numerical data about them. I’ve solved enough problems using those theorems, and now I’m interested if there is a way to make them ”click”.

I’m interested is there a geometrical idea behind Sylow’s theorems (at least one of them), or at least a nice intuitive explanation of why that result should hold.
How do you think about them?

The theorems are stated purely algebraically or arithmetically (number of subgroups). Thus, I found it difficult to get geometirc intuition behind this one. However, I would say at least, that these theorems can be very nicely understood with some very concrete examples. The one I will illustrate is S4.

What about Sylow-2 subgroups? They also can be seen in interesting way: there are three planes which bisect cube, and are parallel or perpendicular to planes of cube. The rotations of cube which take, say blue plane to itself, form dihedral group of order 8, and thus, three planes give three Sylow-2 subgroups, so they are in number \equiv 1\pmod 2. Since blue plane can be moved to green or red plane by some rotational symmetry of cube, this gives the conjugacy of Sylow-2 subgroups. 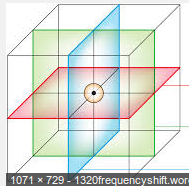