I am interested in the following Jordan curve theorem-esque question:

Suppose that you are given a continuous, injective map γ:R→R2 such that the image is a closed subset of
R2. The complement of the image is an open subset of
R2 and therefore consists of some number of path connected
components. Must this number always be greater than 1?

There are several cases in which this question reduces to the Jordan curve theorem, and one in which it does not (this last case is where the subtlety seems to lie):

Case 1: If the limits limt→±∞|γ(t)|=∞ then we can extend γ continuously to a continuous, injective map S1→S2 via stereographic coordinates. The result then follows by the Jordan curve theorem.

Case 2: If either of the limits limt→±∞γ(t) exist, then since the image of γ is closed, the limit must equal γ(t0) for some t0∈R. Then γ induces a continuous, injective mapping S1→R2, and the result follows by the Jordan curve theorem.

Case 3: If neither of the limits limt→±∞γ(t) exist, and limt→∞|γ(t)|≠∞ or limt→−∞|γ(t)|≠∞, then it’s unclear what may happen, but I can’t imagine an example where the complement is connected.

For example, consider a figure-8 type curve such that the ends approach the middle of the figure 8 from both sides like a topologists sine curve pictured below (this picture is edited from a picture in Munkres Topology, 2ed, p381, or the examples discussed in this answer: Is there a continuous injective map from R that has compact image?). The complement of the image of this curve has three components. 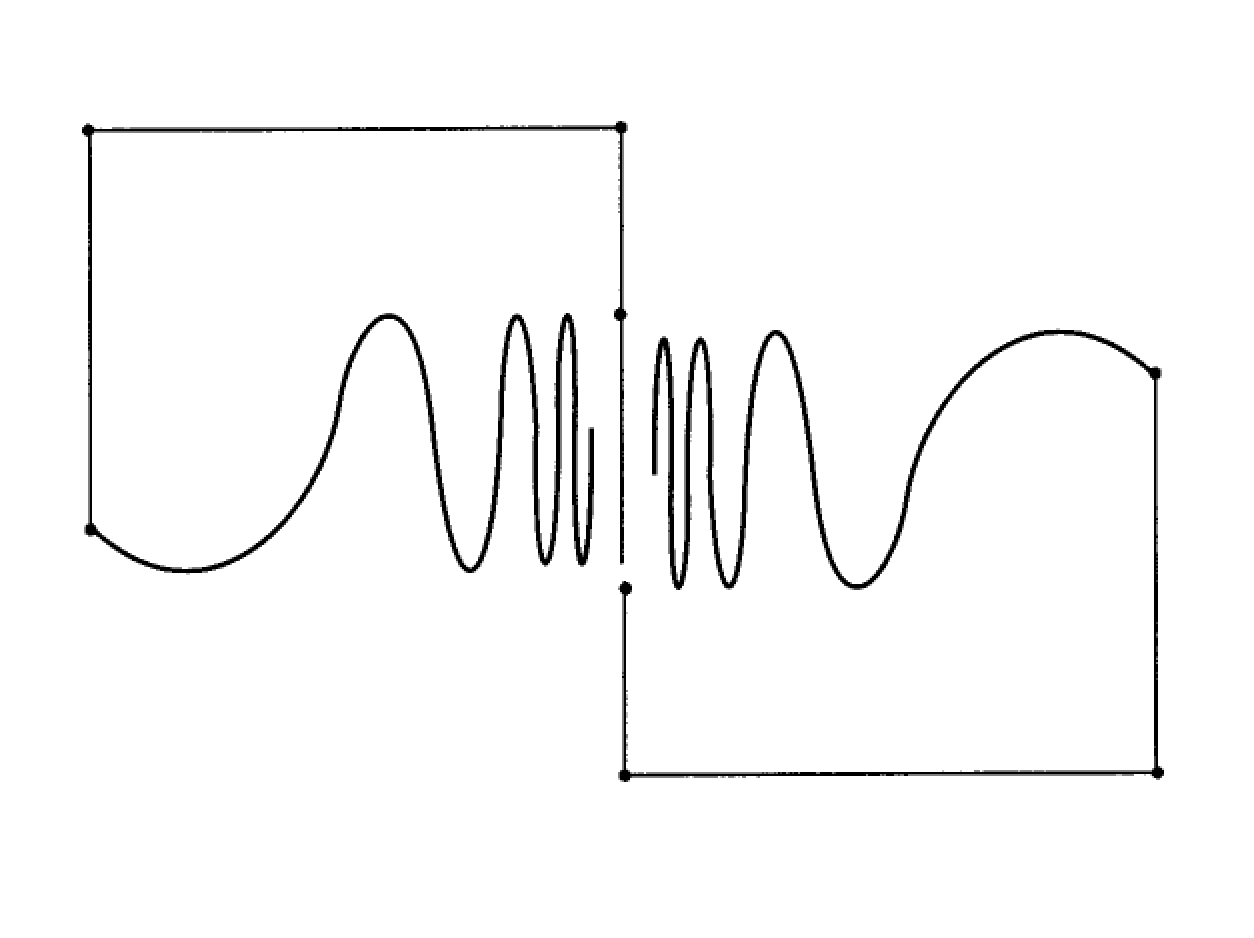 Here is a proof, which assumes familiarity with Chech cohomology and Alexander duality. For the latter, see A.Dold, “Lectures on Algebraic Topology”, formula (8.18): If X\subset {\mathbb R}^n is a closed subset, then

Suppose that f: {\mathbb R}\to {\mathbb R}^n is an injective continuous map whose image is closed in {\mathbb R}^n. Then the restriction of the Euclidean metric from {\mathbb R}^n to Z:=f({\mathbb R}) is complete; in particular, Z (with the subspace topology) is a Baire space.

Remark. The earlier version of my answer contained an error: I was assuming that f([0,\infty)) is closed which need not be the case. See also an edit at the end of this answer.

Proof. If not then for every i\in {\mathbb N}, f([-i,i]) has empty interior in X. Then Z is a union of countably many subsets with empty interior. But Z is a Baire space. A contradiction. qed

I will assume from now on that A\ne \emptyset, otherwise f is a proper map and f({\mathbb R}) is homeomorphic to
the real line. Without loss of generality (by precomposing f with the mat t\mapsto -t), we can assume that A_+\ne \emptyset.

After precomposing f with a translation of {\mathbb R}, we may assume that t_0=0.

Proposition. \check{H}^1_c(X)\ne 0. (Here and in what follows, I use only (co)homology with integer coefficients.)

Proof. I will consider a sequence of locally finite open covers {\mathcal U}_n of X by subsets U_{k,n} such that

Let N_n denote the nerve of {\mathcal U}_n with the vertex v_{k} corresponding to the open set U_{k,n}.

By the construction, the natural map \kappa_n: N_{n+1}\to N_n satisfies

Thus, the sequence of 1-cycles (c_n) defines a nonzero element of

We can now finish the proof:

Proof. By the Alexander duality,

We now are ready to prove:

Proof. Define the subset A=A_+ \cup A_-\subset Z as before. Then A=\emptyset iff f is a proper map. In this case, by the Alexander duality,

hence, Z separates {\mathbb R}^2. If A\ne \emptyset, then, as noted earlier, without loss of generality, we may assume that A_+\ne \emptyset. Then Lemma 3 implies that {\mathbb R}^2- (X=f([0,\infty))) is a disjoint union U\sqcup V of two nonempty open subsets. By applying Baire category argument as in Lemma 1, we see that neither U nor V is contained in Z. Hence, {\mathbb R}^2 – Z= (U – Z)\sqcup (V- Z) is a disjoint union of two nonempty open subsets and, hence, is not connected. qed

Edit. Although we do not need this, here is an interesting fact about the set A_+. Define the subset J:= {\mathbb R} – f^{-1}(A_+). It is easy to construct examples where J is bounded below (using a version of the topologist’s sine curve). However, we have:

Proof. The subset A^c_+:=f(J)\subset Z is open, hence, its complement Z- A^c_+= A_+ is closed. Assume for a moment that J is bounded above. Then removing J from {\mathbb R} does not affect the accumulation set A_+. It follows that each a\in Z – A^c_+ equals the limit

Therefore, for every interval [-n,n], the subset f([-n,n] -J) has empty interior in A_+. Thus, we obtain a contradiction with the Baire property as in the proof of Lemma 1. qed