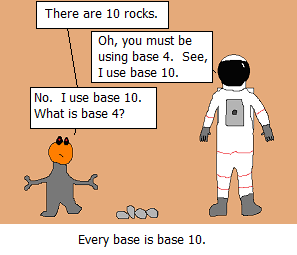 It’s a hilarious witty joke that points out how every base is ‘10‘ in its base. Like,

My question is if whoever invented the decimal system had chosen 9 numbers or 11, or whatever, would this still be applicable? I am confused – Is 10 a special number which we had chosen several centuries ago or am I missing a point?

You must distinguish between numbers and representations. A pile of rocks has some number of rocks; this number does not depend on what base you use. A representation is a string of symbols, like “10”, and depends on the base. There are “four” rocks in the cartoon, whatever the base may be. (Well, the word “four” may vary with language, but the number is the same.) But the representation of this number “four” may be “4” or “10” or “11” or “100” depending on what base is used.