Closed. This question does not meet Mathematics Stack Exchange guidelines. It is not currently accepting answers.

Want to improve this question? Update the question so it’s on-topic for Mathematics Stack Exchange.

Ever since high school, I’ve had a serious problem with math classes. Be it discrete math, algebra, calculus or linear algebra, I seldom have trouble understanding the texts or lectures, but when it comes to executing calculations on homework and exams, I can never do it: I keep making mistakes. It’s been a constant source of frustration, and right now, I’m on the verge of failing linear algebra and second year calculus (which I’ve been avoiding for as long as I could).

I’m currently going through all the exercises and videos on Khan Academy, beginning with one-digit addition, working my way back up to integrals. I was making a lot of mistakes with multiple digit subtraction and multiplication, so initially, I was hopeful that maybe with enough practice in those two things, I’d be good to go again. But it turns out that my mistakes aren’t confined to any one task, and the number of mistakes I make per exercise just accumulates as the tasks become more and more computationally involved:

A typical page from my notebook: 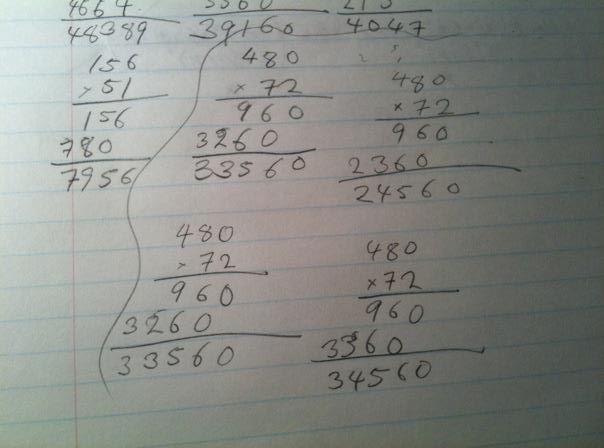 I’ve tried everything: going for walks, ensuring that I have good sleep, writing out every step with almost hilarious verbosity, changing rooms, starting with fresh notebooks, reviewing everything I write, trying different notations, heck I even spent a month refining my handwriting and posture for good measure.

I’m certain I spend about twice as much time as other people practicing too. I avoid taking other courses in the same semesters that I take math courses.

As far as personality goes, in general, I’m not exactly OCD, but I’m not careless either. I probably have more patience than most people — a bit too much, as my friends would tell me. I’m sure you can also tell from my adequate grammar, punctuation and spelling that I probably don’t have any kind of learning disability that would prevent me from following symbolic rules. I’ve gotten near 100% in a first order logic course too.

Yet when I do math, I always screw up. It’s been this way for over a decade, maybe more.

What could I do?

@Rei, I’ve gone through pretty much the same problems as you in school, and also made the same sort of mistakes! And I’ll assume yours isn’t a medical problem. You mentioned a big list of mistakes as being your problem. You probably need to ask yourself first: is there something fundamentally wrong in your understanding, or is it that you just make mistakes when pressed for time, etc.? If it’s the former, get the concept right first, saving the calculations for later. If it’s the latter, it’s a much more common problem that we all get into. I can’t give you a more specific answer in that case without knowing more about when you make these careless mistakes.

If that seems too abstract, here’s some concrete help about your x=480×72 problem. Don’t do it multiple times in the same way – instead check whether the answer makes sense in different ways! (This is an extremely important step that I’ve seen many people neglect, because they get a correct answer. That’s really not understanding maths.) First off , x=(480×72)>(y=480×70), where y should be very easy to do :y=48×7×100=33600. This alone should tell you that , if you got the correct answer in your worksheet, it must be 34560!

Ok, suppose you’re still not sure. That’s fine, we’ll do another quick check. It’s easier z=500×70 which is just 5×7 with three zeros to follow, so z=35000. And x should be a little less; if you’re interested you can find the difference. Otherwise, you can check your computations by finding which answer you got was closest to 35000, and discarding the rest.

What have we gained in the process?

Here’re some thumb rules to keep in mind:

Here’re some simple exercises to try out; you may want to try finding an approximate answer first, without doing any pen-and-paper calculation:

Hope I’ve taken the keen edge off your despair!