Closed. This question does not meet Mathematics Stack Exchange guidelines. It is not currently accepting answers.

Want to improve this question? Update the question so it’s on-topic for Mathematics Stack Exchange.

Here’s my issue I faced;
I worked really hard studying Math, so because of that, I started to realised that I understand things better. However, that comes at a big cost:
In the last few years, I had practically zero physical exercise, I’ve gained 30 kg, I’ve spent countless hours studying at night, constantly had sleep deprivation, lost my social life, and developed health problems. My grades are quite good, but I feel as though I’m wasting my life.

I love mathematics when it’s done my way, but that’s hardly ever. I would very much like my career to be centered around mathematics (topology, algebra or something similar). I want to really understand things and I want the proofs to be done in a (reasonably) rigorous way. Before, I’ve been accused of being a formalist but I don’t consider myself one at all. However, I admit that I am a perfectionist. For comparison, the answers of Theo, Arturo, Jim Belk, Mariano, etc. are absolutely rigorous enough for me. From my experience,
80% or more mathematics in our school is done in a sketchy, “Hmm, probably true” kind of way (just like reading cooking recipes), which bugs the hell out of me. Most classmates adapt to it but, for some reason, I can’t. I don’t understand things unless I understand them (almost) completely. They learnt “how one should do things”, but less often do they ask themselves WHY is this correct. I have two friend physicists, who have the exact same problem. One is at the doctorate level, constantly frustrated, while the other abandoned physics altogether after getting a diploma. Apart from one 8, he had a perfect record, all are 10s. He mentioned that he doesn’t feel he understands physics well enough. From my experience, ALL his classmates understand less than he does, they just go with the flow and accept certain statements as true. Did you manage to study everything on time, AND sufficiently rigorous, that you were able to understand it?**

Frequently, I tend to be the only one who find serious issues in the proofs, the formulations of theorems, and the worked out exercises at classes. Either everyone else understands everything, most or doesn’t understand and doesn’t care the possible issues. Often, do I find holes in the proofs and that hypotheses are missing in the theorem. When I present them to the professor, he says that I’m right, and mentioned I’m very precise. How is this precise, when the theorem doesn’t hold in its current state? Are we even supposed to understand proofs? Are the proofs actually really just sketches? How on earth is one then supposed to be able to discover mathematical truths? Is the study of Mathematics just one big joke and you’re not supposed to take it too seriously?

I have a bunch of sports I like and used to do. Furthermore, I had a perfectly good social life before, so you don’t need to give advice regarding that. I don’t socialize and do sport because digesting proofs and trying to understand the ideas behind it all eats up all my time. If I go hiking, it will take away 2 days, one to actually walk + one to rest and regenerate. If I go train MMA, I won’t be focused for the whole day. I can’t just switch from boxing to diagram chasing in a moment. Also, I can’t just study for half an hour. The way I study is: I open the book, search up what I already know but forgot from the previous day, and then go from theorem to theorem, from proof to proof, correcting mistakes, adding clarifications, etc. etc. To add on, I have a bad habit of having difficulty starting things. However when I do start, I start ‘my engine’, and I have difficulty stopping, especially if it’s going good. That’s why I unintentionally spend an hour or two before studying just doing the most irrelevant stuff, just to avoid study. This happens especially when I had more math than I can shove down my throat which I have, for mental preparations to begin studying. But, as my engine really starts and studying goes well (proven a lot, understood a lot), it’s hard for me to stop, so I often stay late at night, up to 4 a.m., 5 a.m. & 6 a.m. When the day of the exam arrives, I don’t go to sleep at all, and the night and day are reversed. I go to sleep at 13h and wake at 21h… I know it’s not good but I can’t seem to break this habit. If I’m useless through the whole day, I feel a need (guilty conscience) to do at least something useful before I go to sleep. I know this isn’t supposed to happen if one loves mathematics. However, when it’s ‘forced upon you’ what and how much and in what amount of time you have to study, you start being put off by math. Mathematics stops being enjoyment/fun and becomes hard work that just needs to be done. 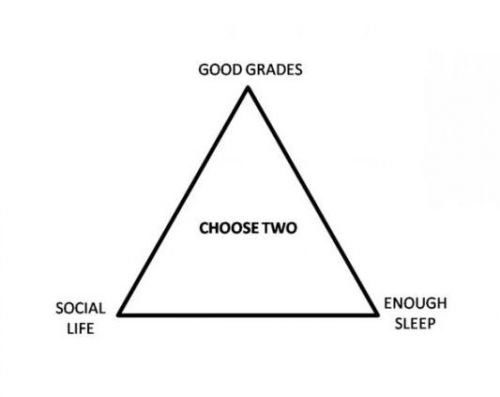 In my view the central question that you should ask yourself is what is the end goal of your studies. As an example, American college life as depicted in film is hedonistic and certainly not centered on actual studies. Your example is the complete opposite – you describe yourself as an ascetic devoted to scholarship.

Many people consider it important to lead a balanced life. If such a person were confronted with your situation, they might look for some compromise, for example investing fewer time on studies in return for lower grades. If things don’t work out, they might consider opting out of the entire enterprise. Your viewpoint might be different – for you the most important dimension is intellectual growth, and you are ready to sacrifice all for its sake.

It has been mentioned in another answer that leading a healthy lifestyle might contribute to your studies. People tend to “burn out” if they work too hard. I have known such people, and they had to periodically “cool off” in some far-off place. On the contrary, non-curricular activities can be invigorating and refreshing.

Another, similar aspect is that of “being busy”. Some people find that by multitasking they become more productive in each of their individual “fronts”. But that style of life is not for every one.

Returning to my original point, what do you expect to accomplish by being successful in school? Are you aiming at an academic career? Professional career? In North America higher education has become a rite of passage, which many graduates find very problematic for the cost it incurs. For them the issue is often economical – education is expensive in North America.

You might find out that having completed your studies, you must turn your life to some very different track. You may come to realize that you have wasted some best years of your life by studying hard to the exclusion of everything else, an effort which would eventually lead you nowhere. This is the worst-case scenario.

More concretely, I suggest that you plan ahead and consider whether the cost is worth it. That requires both an earnest assessment of your own worth, and some speculation of the future job market. You should also estimate how important you are going to consider these present studies in your future – both from the economical and the “cultural” perspective.

This all might sound discouraging, but your situation as you describe it is quite miserable. Not only are you not satisfied with it, but it also looks problematic for an outside observer. However, I suspect that you’re exaggerating, viewing the situation from a romantic, heroic perspective. It’s best therefore to talk to people who know you personally.

Even better, talk to people who’re older than you and in the next stage of “life”. They have a wider perspective on your situation, which they of their acquaintances have just still vividly recall. However, even their recommendations must be taken with a grain of salt, since their present worries are only part of the larger picture, the all-encompassing “life”.

Finally, a few words more pertinent to the subject at hand.

First, learning strategy. I think the best way to learn is to solve challenging exercises. The advice given here, trying to “reconstruct” the textbook before reading it, seems very time consuming, and in my view, concentrating the effort at the wrong place

The same goes for memorizing theorems – sometimes one can only really “understand” the proof of a theorem by studying a more advanced topic. Even the researcher who originally came out with the proof probably didn’t “really” understand it until a larger perspective was developed.

Memorizing theorems is not your choice but rather a necessity. I always disliked regurgitation and it is regrettable that this is forced unto you. I’m glad that my school would instead give us actual problems to solve – that’s much closer to research anyway. Since you have to go through this lamentable process, try to come up with a method of memorization which has other benefits as well – perhaps aim at a better understanding of “what is going on” rather than the actual steps themselves. This is an important skill.

Second, one of the answers suggests trying to deduce as many theorems as possible as the “mathematical” thing that ought to be done after seeing a definition. I would suggest rather the opposite – first find out what the definition entails, and then try to understand why the concept was defined in the first place, and why in that particular way.

It is common in mathematics to start studying a subject with a long list of “important definitions”, which have no import at all at that stage. You will have understood the subject when you can explain where these definitions are coming from, what objects they describe; and when you can “feel” these objects intuitively. This is a far cry from being able to deduce some facts that follow more-or-less directly from the definitions.