Today, we are brought the sad news that Europe’s oldest woman died. A little over a week ago the oldest person in the U.S. unfortunately died. Yesterday, the Netherlands’ oldest man died peacefully. The Gerontology Research Group keeps records: Guinness World Records.

If you live in a country with $N_{\text{country}}$ people, a continent with $N_{\text{continent}}$ people, and a world with $N_{\text{world}}$ people, during a year and on average, how often will you be notified (if you’re paying attention to your quality tabloid) of the death of the oldest man/woman/person alive of your country/continent/world? (Note that a death will result in at most one notification.)

Edit, Suggestions (due to comments; thanks!) only:

Ultimately, I am looking for a realistic formula. That means that life tables are certainly allowed (but mind the ending, and note that some of the oldest people are older than the maximum in the tables).

I guess that the Gompertz–Makeham law of mortality, or any plausible model of late-life mortality, is also fair game.

However, these suggestions do not preclude some insight or realistic assumption that might not need any of those things.

Further potentially useful assumptions (with regard to a subpopulation) may include (if reasonable w.r.t. the question):

(Although such assumptions aren’t necessarily realistic, I don’t immediately see how they would distort the outcome.)

I think that this question is best approached through careful modelling, rather than pure mathematics. Here’s the approach I took. I don’t claim that this is the perfect approach by any means, but it’s a start.

Spoiler: My simulations give a rate of approximately once every 0.66 years, for a population of 7 billion people who share US mortality statistics.

First, I took the US mortality tables from the Center for Disease Control. They only go up to age 100, so I need to extrapolate beyond that. I fitted a power law to the hazard rate $h(a)$ which gives the probability of dying between age $a$ and $a+1$, getting

I then simulated an evolving population until it converged on a stable distribution. I assume $N(a)$ people at age $A$, and a constant birth rate of $9\times 10^7$ people every year (chosen to give a stable popluation of 7 billion). The result is a reasonable-looking population pyramid: 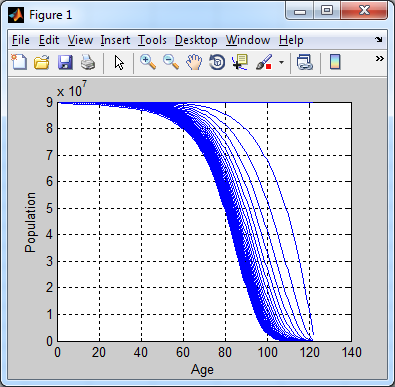 When appropriate I approximate the number of deaths with the normal distribution, but for small populations I use the binomial distribution. In the case that there are some deaths in the highest age bracket, I calculate the probability that the person who died was the oldest person in the world at that time, and record this as an event.

Assuming a population of one billion people (the population of the developed world, to which the US mortality statistics are most likely to apply) we can see the following histogram, which gives the age of the oldest person in the world at the time they die. Comparing to the wikipedia page for oldest people it looks as though the numbers are too high by 1-2 years, but otherwise I’m surprised at how accurate this crude model is! 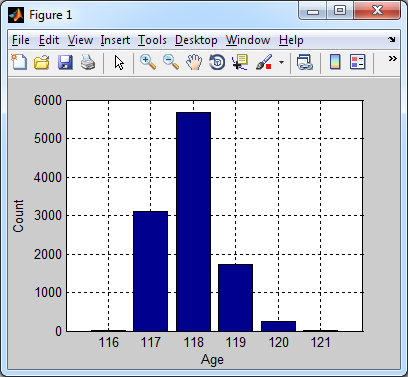 One final chart. This is how the number of deaths of the oldest living person each year varies as a function of the total population. Roughly, it seems to be linear in the logarithm of the population. I’d be interested to see a more rigorous mathematical treatment that can get this result out 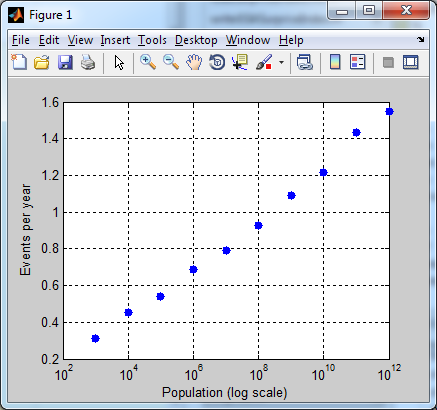 Edit: I corrected a bug which was causing me to estimate the rate as too high. I was approximating the binomial $B(n,p)$ with a normal distribution $\sigma=np(1-p)$ rather than $\sigma^2=np(1-p)$.

Edit no. 2: It was pointed out in the comments that I had another bug, and I also realized that I wasn’t ever checking for the possibility that more than 1 ‘oldest person’ dies in a given year.