I have read somewhere there are some theorems that are shown to be “unprovable”. It was a while ago and I don’t remember the details, and I suspect that this question might be the result of a total misunderstanding. By the way, I assume that unprovable theorem does exist. Please correct me if I am wrong and skip reading the rest.

As far as I know, the mathematical statements are categorized into: undefined concepts, definitions, axioms, conjectures, lemmas and theorems. There might be some other types that I am not aware of as an amateur math learner. In this categorization, an axiom is something that cannot be built upon other things and it is too obvious to be proved (is it?). So axioms are unprovable. A theorem or lemma is actually a conjecture that has been proved. So “a theorem that cannot be proved” sounds like a paradox.

Another question is, how can we be sure that a theorem cannot be proved? I am assuming the description might be some high level logic that is way above my understanding. So I would appreciate if you put it into simple words.

Edit- Thanks to a comment by @user21820 I just read two other interesting posts, this and this that are relevant to this question. I recommend everyone to take a look at them as well.

When we say that a statement is ‘unprovable’, we mean that it is unprovable from the axioms of a particular theory.

Any two points can be joined by a straight line

All right angles are equal to one another.

[The parallel postulate:] If L is a straight line and P is a point not on the line L then there is at most one line L′ that passes through P and is parallel to L.

Euclid proceeds to derive much of classical plane geometry from these five axioms. This is an important point. After these axioms have been stated, Euclid makes no further appeal to our natural intuition for the concepts of ‘line’, ‘point’ and ‘angle’, but only gives proofs that can be deduced from the five axioms alone.

In the two thousand years following the publication of the Elements, one major question that arose was: do we need the fifth axiom? The fifth axiom – known as the parallel postulate – seems less intuitively obvious than the other four: if we could find a way of deducing the fifth axiom from the first four then it would become superfluous and we could leave it out.

The right approach was found independently by Lobachevsky and Bolyai (and possibly Gauss) in the nineteenth century. They took the first four axioms and replaced the fifth with the following:

[Hyperbolic parallel postulate:] If L is a straight line and P is a point not on the line L then there are at least two lines that pass through P and are parallel to L.

The theory is called hyperbolic geometry and it deals with points and lines inscribed on the surface of a hyperboloid: 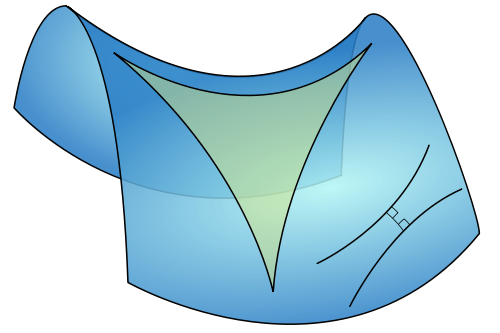 In the bottom right of the image above, you can see a pair of hyperbolic parallel lines. Notice that they diverge from one another.

The first four axioms hold (and you can check this), but now if L is a line and P is a point not on L then there are infinitely many lines parallel to L passing through P. So the original parallel postulate does not hold.

This is a major method for showing that statements are unprovable in various theories. Indeed, a theorem of Gödel (Gödel’s completeness theorem) tells us that if a statement s in the language of some axiomatic theory T is unprovable then there is always some structure that satisfies the axioms of T in which s is false. So showing that s is unprovable often amounts to finding such a structure.

It is also possible to show that things are unprovable using a direct combinatorial argument on the axioms and deduction rules you are allowed in your logic. I won’t go into that here.

You’re probably interested in things like Gödel’s incompleteness theorem, that say that there are statements that are unprovable in a particular theory called ZFC set theory, which is often used as the foundation of all mathematics (note: there is in fact plenty of mathematics that cannot be expressed in ZFC, so all isn’t really correct here). This situation is not at all different from the geometrical example I gave above:

Sometimes we have explicit examples: one important problem at the turn of the century was the Continuum Hypothesis. The problem was solved in two steps:

Between them, these results show that the Continuum Hypothesis is in fact neither provable nor disprovable in ZFC set theory.