This morning, I had eggs for breakfast, and I was looking at the pieces of broken shells and thought “What is the surface area of this egg?” The problem is that I have no real idea about how to find the surface area.

I have learned formulas for circles, and I know the equation for an ellipse; however, I don’t know how to apply that.

The only idea I can think of is to put an egg on a sheet of paper and trace it, and then measure the outline drawn, and then try to find an equation for that ellipse and rotate that about the x-axis. Now, my problem is how I can find the equation of the ellipse from the graph, and will my tracing method really be the edge of the egg? Also, can I use the standard surface area integral? Will I have to use some techniques to solve the integral that are not covered in the AP BC Calculus?

There has to be a better method for finding the surface area. Please, help me understand how to find the surface area of an egg; i.e., how to use my mathematical knowledge for something other than passing exams.

There is a nice equation describing the equation of an egg curve credit to Nobuo Yamamoto :
(x2+y2)2=ax3+3a10xy2,
where 0≤x≤a, a is the length of the major axis of symmetry for an egg.

In other words, we could get it by cutting a boiled egg in half and measure the distance from tip to the bottom. I just drew it in MATLAB, and the curve looks like the following for a=1: 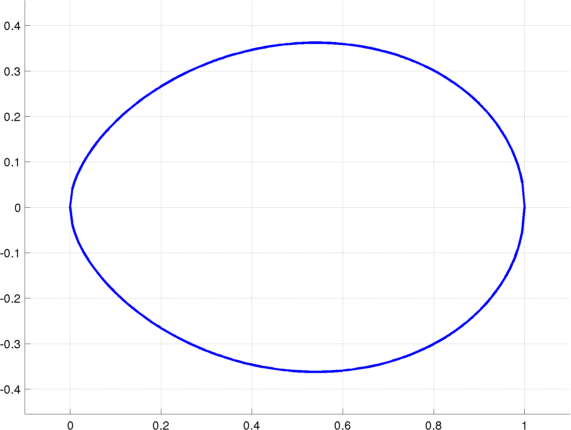 I must say this curve fits pretty well with an egg. Now we have a curve, then the method of computing surface area by revolution, which is taught in Calculus II I believe, can be used to computing the surface. We just revolve the curve above around the egg’s major axis of symmetry and get a surface, here is what looks like when we revolve it around the x-axis by degree π, we can get the lower half by revolve another π: 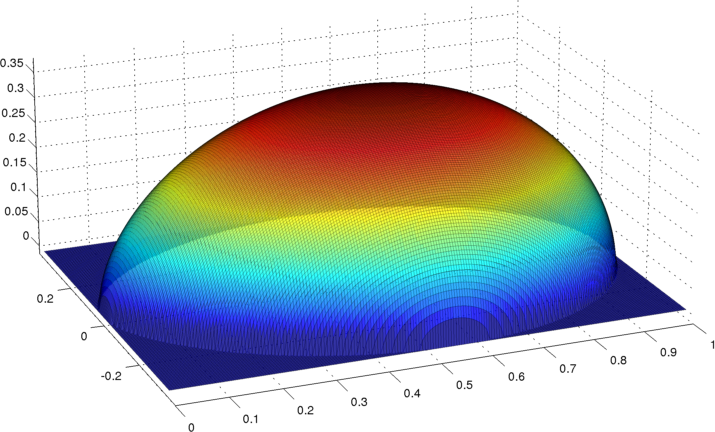 As Ｊ. M. suggests in the comments, the shape looks like an egg, but is a real egg being approximated nicely by this curve? I guess the answer is that “it really depends on that specific egg”!

Let’s say we still want to use surface of revolution to compute the surface area.

But this time, we handle it more numerically from the very start, instead of looking for a curve to fit one thing for all.

Now we want to compute the integral (2) using Simpson’s rule or Trapezoidal rule, which is also taught in Calculus II in most colleges I believe. A remark is that |f′|→∞ when x→0 and x→a, it would be much better if we use adaptive qudrature by putting more sample points near 0 and a.