I discovered unexpected patterns in the plot of the function

with a=π/b, b=50000 and integer arguments x ranging from 0 to 100000. It’s easy to understand that there is some sort of local symmetry in the plot but the existence of intricate global patterns like these

Is there a somehow simple explanation of these regular patterns that emerge when combining such “incommensurate” functions like sine and squaring? Especially of their specific shapes, their increasing distinctness and the distances between them?

Added: This pattern I found only today somewhere in the middle of the plot: 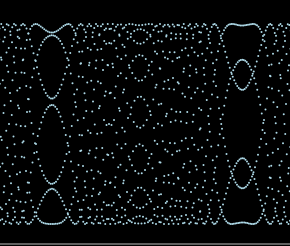 Do you see the “corridors”? 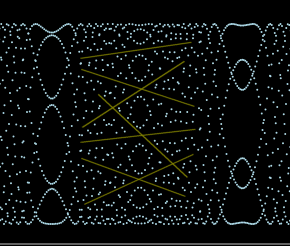 They long for explanation.

This is the phenomenon known as aliasing, caused to the fact that you are sampling a fast-varying signal with a too low frequency. It tends to create replicas of the original signal, but dilated in time.

When a is close to 2mπ, we have at integers

which is a replica of the original function with the smaller coefficient a′=a−2mπ, and this is similar to a time dilation with 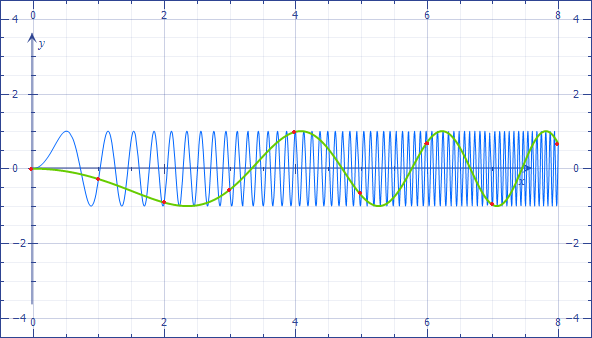 The other patterns are similarly obtained with a phase shift (such as the values at half-integers, corresponding to cosa′n2).