A friend of mine told me that it’s possible to hang a picture on the wall from a string using two nails in such a way that removing either of the two nails will make both the string and picture fall down. My friend also told me that I need to be acquainted with the concept of fundamental groups to understand the solution. The problem is that I’m not. Is there really no solution to this straightforward problem that doesn’t require acquaintance with fundamental groups?

You can see a solution in Figure 1 of Picture-Hanging Puzzles, by Demaine et al. It doesn’t require anything advanced to understand that specific solution. It’s the generalization to more and more nails that seems to need some fancy math.

Here is the two-nail solution from Demaine et al. (don’t mouse over it if you want to think about it first): 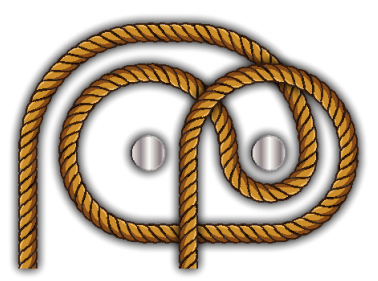 An excerpt of an explanation found in section 3.2:

We define 2n symbols: x1,x−11,…,xn,x−1n.
Each xi represents wrapping the rope around [passing over top of?] the ith nail clockwise, and each x−1i represents wrapping the rope around the ith nail counterclockwise. Now a weaving of the rope can be represented by a sequence of these symbols. For example, the solution to the two-nail picture-hanging puzzle shown [in the figure above] can be written x1x2x−11x−12.
…
In this representation, removing the ith nail corresponds to dropping all occurrences of xi and x−1i in the sequence. Now we can see why [the figure] disentangles when we remove either nail. For example, removing the first nail leaves just x2x−12, i.e., turning clockwise around the second nail and then immediately undoing that by turning counterclockwise around the same nail. In general, xi and x−1i cancel, so all occurrences of xix−1i and x−1ixi can be dropped. (The free group specifies that these cancellations are all the cancellations that can be made.) Thus the original weaving x1x2x−11x−12 is nontrivially linked with the nails because nothing simplifies; but if we remove either nail, everything cancels and we are left with the empty sequence, which represents the trivial weaving that is not linked with the nails (i.e., the picture falls).