If you plot the sequence

you get a nice scattering of numbers where no number is close to any previous number. This image shows the sequence after each iteration. You can (sort of) see that at every column the horizontal lines are roughly evenly distributed. Edit: To be clear I mean even the very first iterations make nicely evenly distributed numbers, which not all rational numbers do. φ is special in some way.

To put it a better way, with φ the distance from the last number in the sequence to the nearest number is always close to as high as possible. It never puts a number close to an existing one unless necessary. 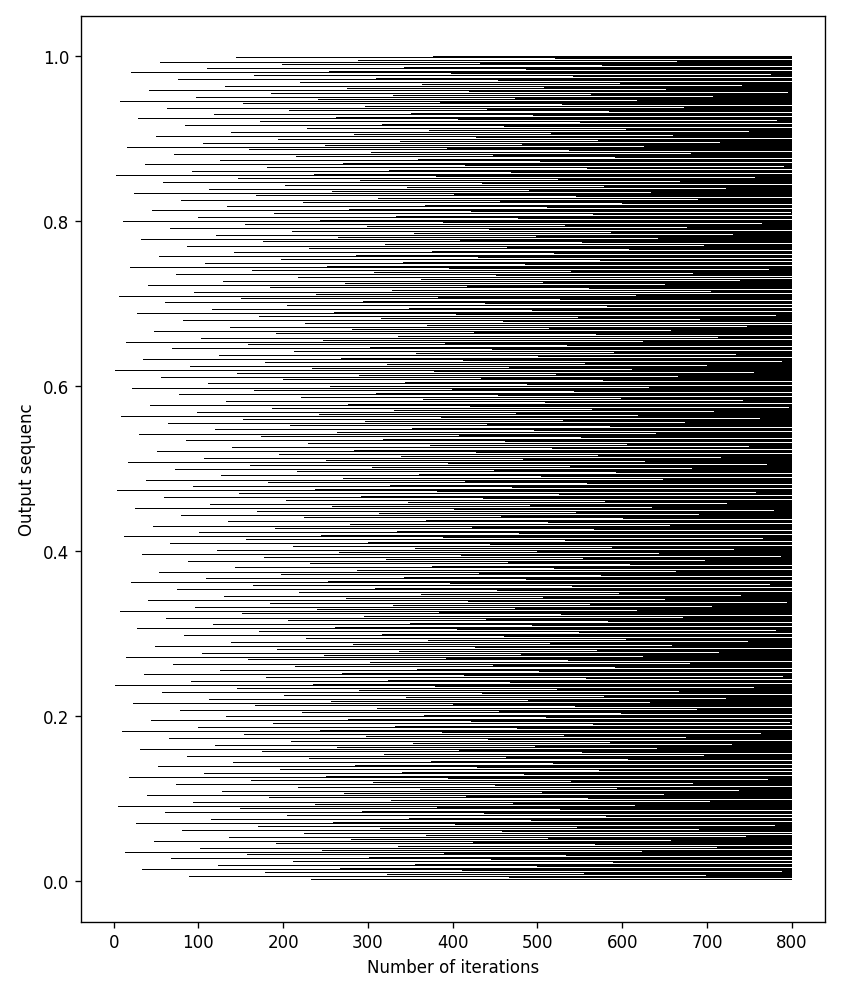 Why does this happen, and is there an equivalent process for two or three dimensions?

As mentioned in the comments, the equidistribution theorem, states that in the limit any irrational value will produce an equidistributed sequence. That is, in the limit as n \rightarrow \infty, all values of x are equally likely, and thus it is said that the range of the sequence is dense on the interval [0,1]. This was proven by Weyl, and so this theorem is often called Weyl’s criterion.

However, as you have mentioned, equidistribution is quite a weak criterion and does not necessarily imply that for finite n the sequence will fill the interval ‘evenly’ without large gaps or clusters.

Sequences that satisfy this stronger criterion of ‘evenness’ are called low discrepancy sequences.

There are many ways to construct low discrepancy sequences, including the van der Corput / Halton sequences, Niederreiter and Sobol sequences to name a few. However, by far the most simple to construct are the Kronecker (sometimes called Weyl) additive recurrence sequences, which are defined exactly as you describe in your question. That is,
x_n = \alpha_0 + \alpha n \; (\textrm{mod} \; 1), \quad n=1,2,3,…
The choice of \alpha_0 does not affect the underlying characteristics of the sequence and so for reasons of simplicty is usually set to zero. (However, for reasons associated with symmetry \alpha_0 = 1/2 is possibly preferable.)

Furthermore, using this same line of argument, they explains why \alpha = \frac{1}{10} (9+\sqrt{221}) is the third-most badly approximable number.

Regarding the final part of your question as to if there is an equivalent process for higher dimensions, the answer is a resounding ‘Yes!‘. 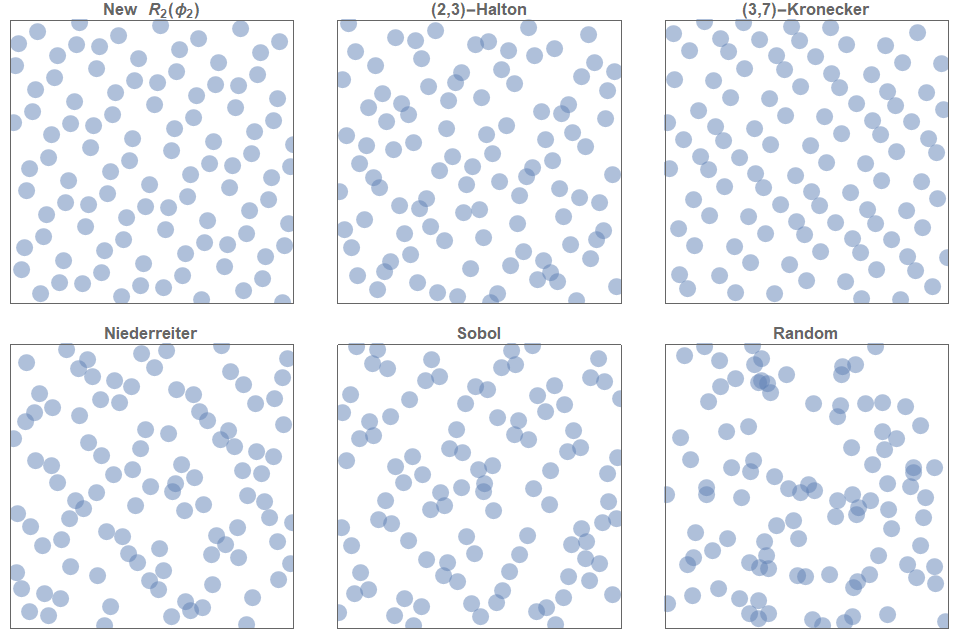 I give details, including many explanatory pictures, of this in my blog post, ‘The unreasonable effectiveness of quasirandom sequences‘, but the short version is as follows:

is equidistributed if \alpha_i are all independently irrational numbers.

In most applications, the construction of such a d-dimensional low discrepancy sequence is based on the square roots of the first d prime numbers. That is, \pmb{\alpha} = (\sqrt{2}, \sqrt{3}, \sqrt{5},..)

This produces quite good results. However, significantly better results can be achieved by creating a recurrence sequence based on a value \varphi_d that is a d-dimensional generalisation fo the golden ratio, \varphi.

Note that in the 1-dimensional case, this results in \varphi_1 = \varphi, the canonical golden ratio.

In the two dimensional case, \varphi_2 corresponds to what is often called the plastic constant. A beautiful dynamic visualization of the low discrepancy sequence based on this plastic constant can be found here.

A dynamic comparison of the different 2-dimensional low discrepancy sequences as n increases, is shown below.