I see the scalar curvature R as an indicator of how a manifold curves locally (the easiest example is for a 2-dimensional manifold M, where the R=0 in a point means that it is flat there, R>0 that it makes like a hill and R<0 that it is a saddle point).

Are there analogous interpretations for the Riemann tensor Rm and for the Ricci curvature Rc? I tried to think about it but I really can't get anything making sense.

We consider the Riemann tensor first. A crucial observation is that if we parallel
transport a vector u at p to q along two different pathes vw and wv, the resulting
vectors at q are different in general (following figure). If, however, we parallel transport
a vector in a Euclidean space, where the parallel transport is defined in our
usual sense, the resulting vector does not depend on the path along which it
has been parallel transported. We expect that this non-integrability of parallel
transport characterizes the intrinsic notion of curvature, which does not depend
on the special coordinates chosen. 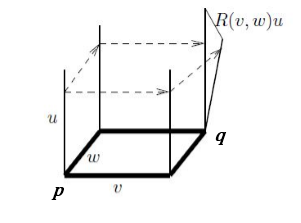 It is useful to say that in this sense visualization of the first Bianchi identity is very easy: 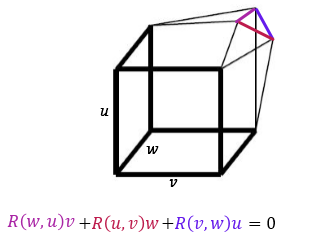 We can give a quantitative geometric interpretation to the sectional curvature
tensor in any dimension. Let M be a Riemannian n-manifold and p ∈ M. If Π is any 2-dimensional subspace of TpM, and V⊂TpM is any neighborhood
of zero on which expp is a diffeomorphism, then SΠ:=expp(Π∩V) is a
2-dimensional submanifold of M containing p (following figure), called the plane
section determined by Π. Note that SΠ is just the set swept out by geodesics
whose initial tangent vectors lie in Π. We define the sectional curvature of M associated with Π, denoted K(Π),
to be the Gaussian curvature of the surface SΠ at p with the induced metric. If (X,Y) is any basis for Π, we also use the notation K(X,Y) for K(Π).

We can also give a geometric interpretation for the Ricci and scalar
curvatures. Given any unit vector V∈TpM, choose an orthonormal basis
{Ei} for TpM such that E1=V . Then Rc(V,V) is given by

Therefore the Ricci tensor has the following interpretation: For any unit
vector V∈TpM, Rc(V,V) is the sum of the sectional curvatures of planes
spanned by V and other elements of an orthonormal basis. Since Rc is symmetric
and bilinear, it is completely determined by its values of the form
Rc(V,V) for unit vectors V .

Similarly, the scalar curvature is

Therefore the scalar curvature is the sum of all sectional curvatures of
planes spanned by pairs of orthonormal basis elements.