Many special functions of mathematical physics can be understood from the point of view of the representation theory of lie groups. An example of the power of this viewpoint is given in my question here. The gist of the theory is as follows:

The general set up here is that we have a group acting on a space $X$, and we look at the space of functions on $X$
(let me write it $\mathcal F(X)$). Then there is a natural representation of $G$ on $\mathcal F(X)$.

(b) If $ X = G = \mathbb R$, with $G$ acting on itself by addition,
then the solution to the above question (how does $\mathcal{F}(\mathbb{R})$ decompose under the action of $\mathbb R$) is the theory of the
Fourier transform.

(c) If $ X = S^2$ and $G = SO(3)$ acting on $X$ via rotations, then
decomposing $\mathcal F(S^2)$ into irreducible representations gives
the theory of spherical harmonics. (This is an important example in
quantum mechanics; it comes up for example in the theory of the
hydrogen atom, when one has a spherical symmetry because the electron
orbits the nucleus, which one thinks of as the centre of the sphere.)

(d) If $ X = SL_2(\mathbb R)/SL_2(\mathbb Z)$ (this is the quotient of
a Lie group by a discrete subgroup, so is naturally a manifold, in
this case of dimension 3), with $G = SL_2(\mathbb R)$ acting by left
multiplication, then the problem of decomposing $\mathcal F(X)$ leads
to the theory of modular forms and Maass forms, and is the first
example in the more general theory of automorphic forms.

The same idea can explain how Bessel, Hypergeometric functions etc… arise geometrically. Again my question has an example of this. This table: 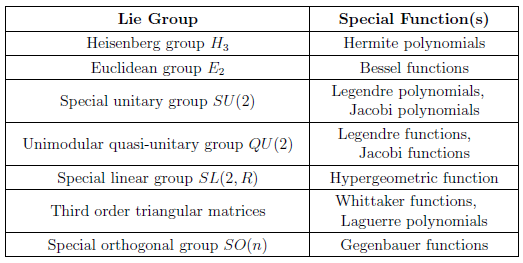 lists 7 groups and the differential equation each is related to.

My question is asking for an intuitive way to think about the 7 groups listed and what they geometrically mean, and why they relate to some invariance in Laplace’s equation $\nabla^2 u = 0$. I even think there are a few different interpretations, e.g. in terms of homogeneous spaces, hyperbolic spaces, etc… so I’m kind of lost.

To give an example of what I’m hoping for, take the Euclidean Group $E_2$, it can be represented by matrices of the form

Intuitively this is the group of plane motions, the group of all translations and rotations in the plane. If Laplace’s equation models a problem with cylindrical symmetry, i.e. Laplace’s equation is invariant under the group of plane motions, classically we end up having to solve Bessel’s equation, but group-theoretically we can solve the problem with representation theory this magical way instead. That shows how Bessel’s equation is just another way to say: “find a function in the plane such that when we shift it right, then shift it back left again, all locally (i.e. differentially) in polar coordinates, we get the same function”. The same model holds for all equations in that table, but I don’t know the geometry or pictures allowing me to see it.

Some present confusion of mine:

When I look at $SL(2,R)$ and it’s matrix representation I have no intuitive picture of the group it’s representing or any geometric picture (like a cylinder) to think of that tells me when solving $\nabla^2 u = 0$ will result in the Hypergeometric equation, for example.

If I try to think of $SO(3)$ as the group of rotations of a sphere I get Gegenbauer functions, but Gegenbauer polynomials give Legendre polynomials as a special case. However they also arise from the $SU(2)$ spinor representation of $SO(3)$. My guess is that this all links together because rotations can be decomposed into products of reflections, and spinor representations arise from this simple idea. But is it okay to think of $SO(3)$ as a group of 3-D Rotations and $SU(2)$ as the reflections that generate those rotations?

Edit: I have skimmed through http://www-users.math.umn.edu/~mille003/Lie_theory_special_functions_paper.pdf, by Willard Miller, referred to by @rrogers in the comments. In that paper, the author mentions that a class of special functions occur as matrix elements of irreducible representations: see the Peter-Weyl theorem (https://en.wikipedia.org/wiki/Peter–Weyl_theorem) and the Schur orthogonality relations (https://en.wikipedia.org/wiki/Schur_orthogonality_relations). As an example, if $G = SO(3)$, then the spherical harmonics are related to the matrix elements, when $SO(3)$ is described using Euler angles.

The author also mentions other ways in which symmetry/group theory and special functions are related (I quote: as basis functions for Lie group representations, as solutions of Laplace-Beltrami eigenvalue problems with potential via separation of variables, as Clebsh-Gordan coefficients).

It therefore seems that special functions are related to Lie groups in many different ways.

I am not well versed in special functions, but the way I think of them, which may not apply to all cases in which the functions are called special, is as special bases elements of the space of invariants of a system of differential equations (usually coming from physics), that are associated to the group of symmetries of that system.

Old answer: Finally, I can tell you a little about the geometry of the Lie groups you have mentioned, $SL(2,\mathbb{R})$, $SU(2)$ and $SO(3)$. Let me mention Helgason’s books which may be useful to you too.

Regarding $SU(2)$, it acts naturally on the space of Weyl spinors $S = \mathbb{C}^2$ (by just matrix multiplication). But then $S \odot S$, the symmetric square of $S$, is a complex $3$-dimensional space, on which $SU(2)$ acts via the induced representation. You can check that there is actually a real slice $V \subset S \odot S$ on which $SU(2)$ acts, which actually factors through $SU(2)/\{\pm Id\}$, and which preserves a real inner product (the inner product is induced by a symplectic form on $S$), as well as a choice of orientation of $V$. Thus one gets a group homomorphism from $SU(2)/\{\pm Id \}$ into $SO(3)$, and one can check that it is actually an isomorphism.

I hope this helps!