While I basically understand what a determinant is, I wonder how this idea was developed? What was the principal idea behind its origination? I would like to know this so that I can have a better conceptualization of the determinant.

Let me tell you what I know in general.

The determinant was primarily introduced as a gauge to measure the existence of unique solutions to linear equations. It’s like a litmus paper (which is used to know about acids and bases, but in this case its the existence of unique solutions). If you doubt that one can measure the uniqueness of solutions, I have a pair of magic spectacles you may keep that enable you to visualize the determinant in a new geometric way (this in fact can be found in many standard books, but I wanted to write the quintessence here).

In response to your first question about origin, it dates back to the 3rd century, when Chinese mathematicians used determinants in their book by name The Nine Chapters on the Mathematical Art (Chinese version and English version here ). At first, when the historians used the concept of determinants, they didn’t refer to matrices but merely to the system of linear equations and treated the determinant as a property which tests for the existence of unique solutions for a system of linear equations. And later, due to the discovery of matrix theory, determinants have been moved to the theory of matrices (in a new manner of evolution).

If you consider a matrix (abcd) the determinant is given by ad−bc. You may wonder what information does ad−bc may have within itself. All you need to do is to view things in geometric manner when you are unable to visualize things in algebraic way. Matrices are closely related to fields: in vectors and linear algebra, we representing vectors in terms of matrices. They can be seen as collections of vectors. The example that I have in mind is: consider a billiard table. Before hitting the balls, you take a thing which has a triangular frame and then arrange all the balls (present in an irregular manner) into a triangular shape. It’s like arranging things in an organised manner, as human beings always try to do.

Let me explain the topic in greater detail. 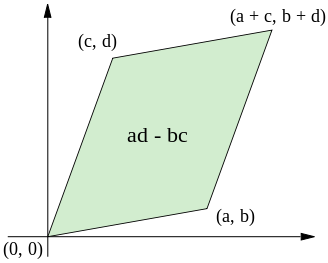 If you look at the above figure, you can clearly see the coordinates. You can think of the columns of the matrix as vectors and the entities in the column representing their Cartesian placement (the coordinate positions). So now if you take all the above things into consideration, you can clearly see that if ad−bc=0 then the rhombus suddenly became a straight line, and in generalized manner a parallelopiped suffers a decrement in dimension by one (making the volume zero, which indirectly implies that it has an area). So analogously one can see that if the determinant becomes zero, according to the Cramer’s rule, it makes the denominator go ∞, which is a violation.

Some of the important alternative notions about determinants: (stress on second one) 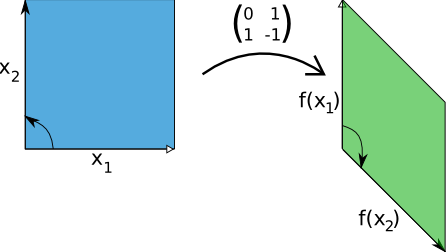 I have some suggestions for you. Apart from reading about matrix theory in Wikipedia page I suggest reading a very good article Making Determinants Less Weird by John Duggan. And I have come across another good article recently, which is here

P.S : I took much time to edit and post this, so users are kindly requested to post any suggestions, in case of down-votes.