A friend sent me a link to this item today, which is billed as an “Irrational Numbers Wall Clock.” 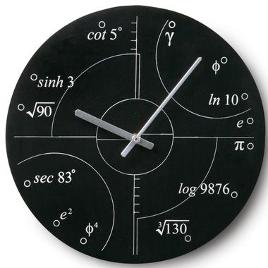 There is at least one possible mistake in it, as it is not known whether γ is irrational.

Anyway, this started me wondering about how to improve the design of this clock from a mathematical standpoint. Here’s my formulation of the problem:

Obviously, goals 2, 3, and 4 act against each other. And, as Jonas Meyer points out, “as closely as possible” and “as simple as possible” are not well-defined. That is intentional. I am afraid that if I tried to define those precisely I would preclude some answers that I might otherwise consider good. Thus, in addition to the mathematics, there’s a sizable artistic component that goes into what would be considered a good answer. Hence the “soft-question” tag. I’m really curious as to what the math.SE community comes up with and then what it judges (via upvoting) to be the best answers, subject to these not-entirely-well-defined constraints.

Note that the designer of the clock given here was not trying to approximate the integers on a clock as closely as possible.

Note: There is now a community wiki answer that people can edit if they just want to add a few suggestions rather than all twelve.

Here’s a list of irrational numbers which almost fulfill your criteria.

Each were chosen to be accurate to within ±0.1, so that no two of them implicitly express the same mathematical approximation, and so that none of them “cheats” in order to fudge an exact result involving integers to obtain a slightly inexact, irrational result. Only the last number fails to meet your criteria, as it is slightly larger than 12.

I would prefer not to use cosecant, integers greater than 12, or more than two additions/subtractions — it is too easy to get results if you rely on these — but I think I’ve spent enough time on this diversion for now. 🙂

Added: Since it seems that I can’t sleep tonight, here is a list of approximate values: