Two people have to spend exactly 15 consecutive minutes in a bar on a given day, between 12:00 and 13:00. Assuming uniform arrival times, what is the probability they will meet?

I am mainly interested to see how people would model this formally. I came up with the answer 50% (wrong!) based on the assumptions that:

but my methods felt a little ad hoc to me, and I would like to learn to make it more formal.

Also I’m curious whether people think the problem is formulated unambiguously. I added the assumption of independent arrival myself for instance, because I think without such an assumption the problem is not well defined.

This is a great question to answer graphically. First note that the two can’t arrive after 12:45, since they have to spend at least 15 minutes in the bar. Second, note that they meet if their arrival times differ by less than 15 minutes.

If we plot the arrival time of person 1 on the x axis, and person 2 on the y axis, then they meet if the point representing their arrival times is between the two blue lines in the figure below. So we just need to calculate that area, relative to the area of the whole box.

The whole box clearly has area

The two triangles together have area

Therefore the probability of the friends meeting is 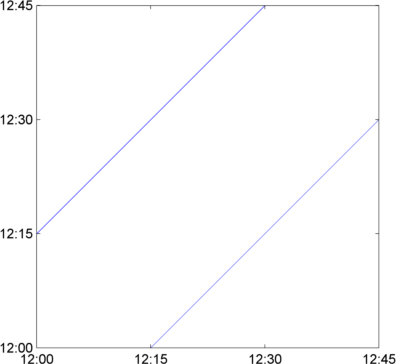