The naive description of the radius of convergence of a complex power series is as the largest radius so that the ball avoids poles and branch cuts. This makes sense in a world where analytic functions are at worst meromorphic on C or involve the complex logarithm, but is patently false when you consider things like f(z)=∞∑n=0zn!+1n!+1 which is continuous on the boundary |z|=1 but has D as its full domain. A better way of talking about power series is to say that a power series terminates when it encounters a singular point: a point that the function cannot be analytically continued through.

Question: Is there a sufficient way of looking at properties of a function within its domain to tell if you are “getting close” (in some sense or another) to a singular point? Can this be done while avoiding statements about points on the boundary explicitly, perhaps by talking exclusively about the behavior of the function or its derivatives? This is to say, can a power series tell when it’s time to stop? 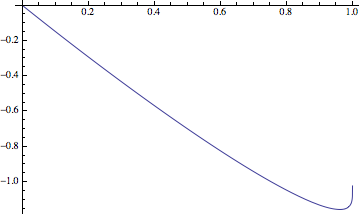 Final Comments: I have decided against removing any of these points in case there are students who find them interesting. I suppose a reformulation of my question might be: Is there a more geometric way of explaining when a power series decides to stop, in contrast to simply looking at successive derivative operations applied to the coefficients (which is more or less how we actually compute the radius of convergence)?

There is a simple criterion, due to Euler. Suppose that your function is known
to be analytic in the unit disk. Expand it into the Taylor series at the point
eiθ/2. The radius of convergence of the resulting series is 1/2
if and only if eiθ is a singularity.

As the radius of convergence is simply 1/lim supn→∞|f(n)(eiθ/2)/n!|1/n this certainly satisfies your requirement: it is in terms of the "behaviour inside the domain" as z approaches singularity.
It does not even have to approach too much:-)

This looks trivial, but actually you can extract much from this simple criterion, for example Pringsheim's theorem that a series with non-negative coefficients has a singularity at the point where the circle of convergence intersects the positive ray, or Hadamard's gap theorem.
See L. Bieberbach, Analytische Fortsetzung, Springer 1955.