My mom gave me a roll of toilet paper to put it in the bathroom, and looking at it I immediately wondered about this: is it possible, through very simple math, to calculate (with small error) the total paper length of a toilet roll?

Writing down some math, I came to this study, which I share with you because there are some questions I have in mind, and because as someone rightly said: for every problem there always are at least 3 solutions.

I started by outlining the problem in a geometrical way, namely looking only at the essential: the roll from above, identifying the salient parameters: 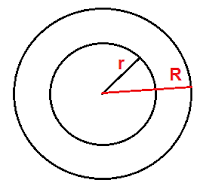 I treated the whole problem in the discrete way. [See the end of this question for more details about what does it mean]

In a discrete way, the problem asks for the total length of the rolled paper, so the easiest way is to treat the problem by thinking about the length as the sum of the whole circumferences starting by radius $r$ and ending with radius $R$.
But how many circumferences are there?

Here is one of the main points, and then I thought about introducing a new essential parameter, namely the thickness of a single sheet. Notice that it’s important to have to do with measurable quantities.

Calling $h$ the thickness of a single sheet, and knowing $b$ we can give an estimate of how many sheets $N$ are rolled:

Having to compute a sum, the total length $L$ is then:

1) Could it be a good approximation?

2) What about the $\gamma$ factor? Namely the paper compression factor?

3) Could exist a similar calculation via integration over a spiral path? Because actually it’s what it is: a spiral.

Thank you so much for the time spent for this maybe tedious maybe boring maybe funny question!

The assumption that the layers are all cylindrical is a good first approximation.

The assumption that the layers form a logarithmic
spiral is not a good assumption at all, because it supposes that the
thickness of the paper at any point is proportional to its distance
from the center. This seems to me to be quite absurd.

An alternative assumption is that the layers form an Archimedean spiral.
This is slightly more realistic, since it says the paper has a uniform
thickness from beginning to end. But this assumption is not a much more
realistic than the assumption that all layers are cylindrical;
in fact, in some ways it is less realistic. 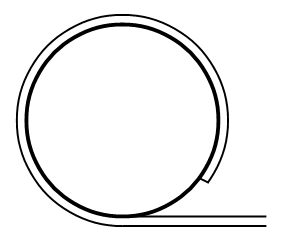 Notice that the sheet lies directly on the surface of the cylinder,
that is, this part of the wrapped sheet is cylindrical. 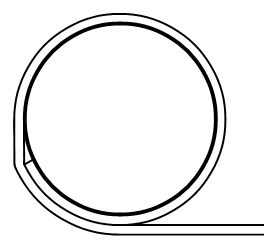 As we continue rotating the cylinder, it takes up more and more layers
of the sheet, each layer consisting of a cylindrical section going
most of the way around the roll, followed by a flat section that joins
this layer to the next layer. We end up with something like this: 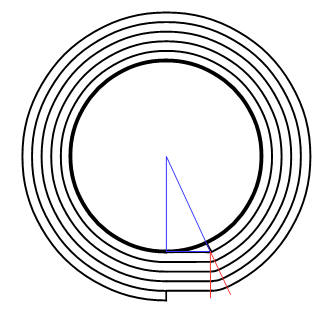 Notice that I cut the sheet just at the point where it was about to
enter another straight section. I claim (without proof) that this
produces a local maximum in the ratio of the length of the wrapped sheet
of paper to the greatest thickness of paper around the inner cylinder.
The next local maximum (I claim) will occur at the corresponding
point of the next wrap of the sheet.

The question now is what the thickness of each layer is.
The inner surface of the cylindrical portion of each layer of the
wrapped sheet has less area than the outer surface, but the portion of
the original (unwrapped) sheet that was wound onto the roll to make this layer had equal area on both sides. So either the inner surface was
somehow compressed, or the outer surface was stretched, or both.

I think the most realistic assumption is that both compression and stretching
occurred. In reality, I would guess that the inner surface is compressed more than the outer surface is stretched, but I do not know what the
most likely ratio of compression to stretching would be.
It is simpler to assume that the two effects are equal.
The length of the sheet used to make any part of one layer of the roll
is therefore equal to the length of the surface midway between the
inner and outer surfaces of that layer.
For example, to wrap the first layer halfway around the central cylinder
of radius $r$, we use a length $\pi\left(r + \frac h2\right)$
of the sheet of paper.

The reason this particularly simplifies our calculations is that the
length of paper used in any part of the roll is simply the area of the
cross-section of that part of the roll divided by the thickness of the paper.

The entire roll has inner radius $r$ and outer radius $R = r + nh$,
where $n$ is the maximum number of layers at any point
around the central cylinder. (In the figure, $n = 5$.)
The blue lines are sides of a right triangle whose vertices are
the center of the inner cylinder and the points where the first layer last touches the inner cylinder and first touches its own end.
This triangle has hypotenuse $r + h$ and one leg is $r$, so the other
leg (which is the length of the straight portion of the sheet)
is $$ \sqrt{(r + h)^2 – r^2} = \sqrt{(2r + h)h}.$$
Each straight portion of each layer is connected to the next layer
of paper by wrapping around either the point of contact with the glued
end of the sheet (the first time) or around the shape made by
wrapping the previous layer around this part of the layer below;
this forms a segment of a cylinder between the red lines with center at
the point of contact with the glued end.
The angle between the red lines is the same as the angle of the blue
triangle at the center of the cylinder, namely
$$ \alpha = \arccos \frac{r}{r+h}.$$

One notable difference between this estimate and some others
(including the original) is that I assume there can be at most
$(R-r)/h$ layers of paper over any part of the central cylinder,
not $1 + (R-r)/h$ layers.
The total length is the number of layers times $2\pi$ times the
average radius, $(R + r)/2$, adjusted by the amount that is missing in the
section of the roll that is only $n – 1$ sheets thick.

Things are not too much worse if we assume a different but uniform ratio
of inner-compression to outer-stretching, provided that we keep the
same paper thickness regardless of curvature; we just have to make an
adjustment to the inner and outer radii of any cylindrical segment of the roll, which I think I’ll leave as “an exercise for the reader.”
But this involves a change in volume of the sheet of paper.
If we also keep the volume constant, we find that the sheet gets thicker
or thinner depending on the ratio of stretch to compression and
the curvature of the sheet.
With constant volume, the length of paper in the main part of the
roll (everywhere where we get the the full number of layers) is the
same as in the estimate above, but the total length of the parts of the
sheet that connect one layer to the next might change slightly.