Update (6/19/2014) Just wanted to say that this idea that I posted more than a year ago, has now become reality at: http://euclidthegame.com/

Original post
I just watched this video about Euclid’s treatise the Elements. I got introduced to the postulates and a couple of propositions of book I. I really liked this video, I’m not sure if this is because of Euclid or because of how Wildberger explains it (or maybe both ). This may sounds a little strange, especially for the mathematicians here from an older generations (I’m 22), but this way Euclid has structured his postulates/propositions reminds me to and old addiction from me: Video Games.

For the ones that are not familiar with video games: In many games you begin with some kind of character, which has some basic “abilities”, for example you are able to do some kind of “fight combo”, or “build” something or whatever. Okay, I may not do a good job explaining this, but I guess most here understand what I mean.

If you proceed through the different levels, you begin to get more and more abilities. In the beginning your character can only do the basics. But if you accomplish the right “goals”, you character will be able “unlock” “abilities”. After a while you will feel awesome about all the things your character is able to do.

When I was watching this video, I feel like, “hey, isn’t that the same thing as Euclid was doing?”. You begin with just 3 constructions (your begin set of abilities). And if you prove theorems (accomplish levels), you will be able to use those in new theorems (abilities you can use in new levels).

It seems like Euclid’s the Elements got all the elements to be a very addictive game. I’m a little bit fancying this idea. I really see myself getting addictive to such kind of game that would guide level by level to the whole work of Euclid: 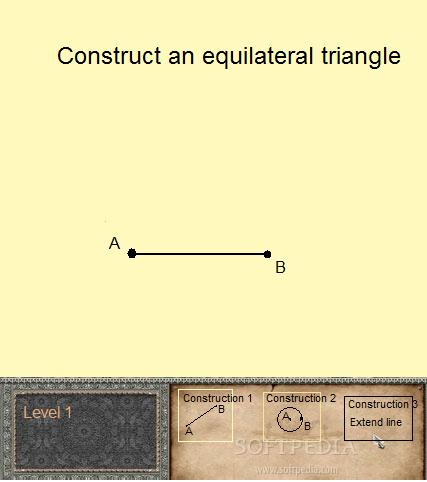 This is how I picture such a game could look like. Please forgive me for my ugly drawings.

Well, I’ve been looking if something like this already exist, but I couldn’t find anything. So that is my first question: “Does there exist a “game” like this ?” I’ve seen many geometry software (like GeoGebra), and I think this excellent software, but what I would like is something that is more closer to the addictive set up of most games. Getting a character, and working your way through the levels (in this case: beginning with some basic construction and working your way through all the theorems). I lost hope that this already exist, but if somebody know some kind of software that comes very close, I would love to know! If nothing like this exist, I hope that I may be able to inspire some programmer here that such a game would be really awesome 🙂

Edit Would it be hard to program such a game ? I’m considering trying to program this myself. It feels like I only need to add some kind of campaign mode to GeoGebra. Or should I ask these question at stackoverflow?

Edit I was playng around a little bit with GeoGebra, but with these 3 constructions I cannot pass level 1 (constructing an equilateral triangle). I think I need to add another construction to the construction bar: Constructing a point at an intersection.

I have my students play almost exactly this game at the start of a course in College Geometry, through GeoGebra. Of course, it lacks the video game style interface you’re describing (and which, I agree, would be awesome), so I would be excited to see something like this polished up nicely.

I’ll tell you briefly what I do in class and a little about how you could spice it up. Be sure to sign me up as a β tester!

First, GeoGebra is heavily customizable in terms of what tools are available. So on the first day of class I have them open a blank GeoGebra worksheet where the only tools are available are the minimal compass and straight-edge constructions: Create a point, connect two points through a line, and draw a circle given its center and a second point. The next very handy point of GeoGebra is that you can make tools (or, “unlock abilities”) which allow you to write macros to accomplish repetitive tasks. For example, students quickly tire of manually bisecting each line segment and are motivated to construct a tool that can do it more quickly. Incidentally, the challenge that students are trying to accomplish is to develop a set of tools that minimizes the number of mouse clicks they need to use to accomplish a series of geometric constructions. Hartshorne’s Geometry is a good source for such problems, including some rather challenging ones (boss battles?)

This typically goes over really well, but I agree that for the casual audience we’d like to jazz it up some more. Okay, so how do you jazz it up? Well, the third great feature of GeoGebra you can exploit is its ability to embed itself in HTML, and in particular interface with javascript code. The things I do by hand for the class (pre-ordaining a set of tools) can be implemented as HTML/javascript buttons outside of the main geogebra panel. So as your picture suggests, you could, for example, give a player a scrollable inventory of clickable tools (Daggerfall in particular is entering my visual consciousness at the moment) for use in their constructions. This also embeds the entire game in a more robust and convenient programming framework, as keeping track of a bunch of counters and complicated global structure is somewhat non-intuitive using GeoGebraScript.