I am aware of a few example of continuous, nowhere differentiable functions. The most famous is perhaps the Weierstrass functions

but there are other examples, like the van der Waerden functions, or the Faber functions. Most of these “look like” some variation of: 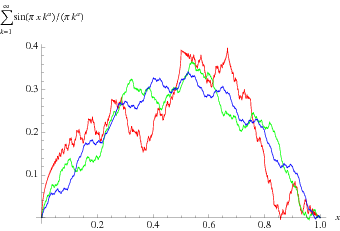 Specifically, they are clearly not invertible. Since these functions are generally self-similar at many scales, this non-invertability would seem to hold essentially everywhere.

I’m wondering if it’s possible to construct such a function which is invertible. Intuitively, maybe this would be “jittery” in the same way as the Weierstrass function, but if it had a slope which always increased, it would be invertible. Or perhaps there is at least an example in which the function is invertible over some segment of the range.

Interestingly, there are no such examples! For a continuous function f:R→R to be invertible, it must be either monotone increasing or decreasing. A famous classical result in analysis, Lebesgue’s Monotone Function Theorem, states that any monotone function on an open interval is differentiable almost everywhere. Hence, there are no continuous functions that are invertible and nowhere differentiable.